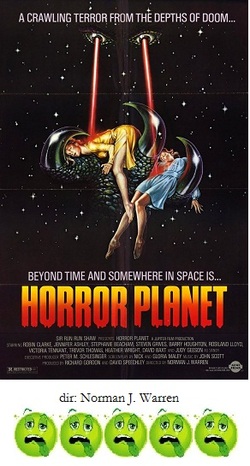 If you are going to make an effective outer-space creature feature, one thing you have to remember: Don't be cheap...or at least don't look cheap. Horror Planet is a movie with the delusion that, by barely ever showing the alien or never showing the alien moving, it can still scare the bejesus out the audience. Wrong! Not only is Horror Planet embarassingly cheap and cheesy, but it is also very boring and very unpleasant.

Basically, the plot is the cliche-ridden one where a group of interstellar archaeologists on another planet accidentally....gasp....unearth an alien. However, since this movie was made on a budget of about $6 they really couldn't afford to give us an alien per se. Instead, they decided to cut corners and have one of the female crewmembers become impregnated by an alien and then just show HER doing all of the running around and killing. Combine that mistake of judgement with phony sets and "spacesuits" that actually look like something a 3rd-grader would cobble together for a halloween costume. It would affectionally be called "low-budget".

You see, Horror Planet begins with the alien "attack", off-camera. One of the male crewmembers has been killed, and the female is left in a catatonic state.  I'm not going to bother with names because the script is so poorly written that the people barely HAVE names let alone distinguishing personalities. This movie couldn't even RISE to cliches.

During her catatonia, the injured woman hallucinates (or is it a flashback?) being strapped down to a table and impregnated by an alien. This whole scene is filmed like this: she opens her eyes, she sees the phony looking foamrubber alien standing at the foot of the table, then we see a giant glass tube being inserted into her (yes, there) and a nauseating, green, clumpy slime being poured in.

Anyway, the whole plot arc is about how the more preggers she gets, the more murderous she becomes, dispatching the rest of the crew with wild abandon until she finally gives birth to two little squeaking foamrubber aliens, which then proceed to eat her.

This is about the most boring and crappily made attempt to cash in on Alien ever made. Between the woman's eye-popping overacting and slaughtering, there are loooooong stretches of banal nothingness. It wouldn't be so bad if the script weren't just so....well....crappy. Any 3 year-old armed with a box of crayons could come up with better dialogue than this. A basic exchange would go something like: "Gee, what was out there?" "I don't know." and then there is "What are those crystals?" "I don't know."

The only single point of interest in the whole film is the appearance of a young Victoria Tennant (All of Me, Flowers in the Attic) making her film debut.  Even then, her sole function seemed to be to wait around for the pregnant Alien-woman to stab her to death with a pair of scissors.

The original title of this mess was Inseminoid, which gives a hint of the distasteful direction the movie was going in before their $6 dollar budget was wiped out.  Steer way clear of this cinematic dead zone.