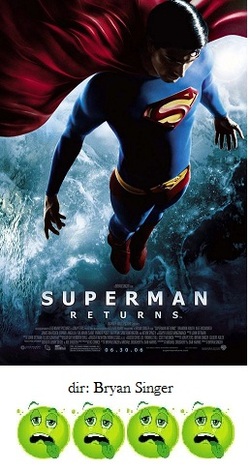 Bryan Singer hoped his new rendering of Superman would achieve the same success of Christopher Nolan's Batman reboot, Batman Begins; however, with Superman Returns, he made many serious errors.

The first problem was Singer's decision to not update Superman for a modern, 21st Century audience.  The things that worked in the original comics and television shows, just will not fly in 2006.  It's too much to assume that anyone in this day and age would accept the fact that no one can recognize that Superman and Clark Kent are the same person.  Considering people change their appearances at such a rapid clip and no one really has any issues with recognition, the simple act of putting on and taking off glasses would not make a difference today.  This also is compounded with the fact that, in this movie, Superman and Lois Lane have already screwed each other.  If Lois has such selective memory lapses after bedding a superhero and giving birth to his child, then maybe she isn't exactly a fit mother or capable of holding any kind of job where intelligence was a requirement.

Those failures in logic aside, the even bigger problems are the casting decisions.  Newcomer Brandon Routh was chosen to play Superman, and although he has the good looks for the role, he lacks any charisma or personality.  Whether he's Superman or Kent, he is pretty much exactly the same, which of course also makes the logical problems with his identity even harder to accept.  Kevin Spacey would've seemed to be the perfect choice for the role of archvillain Lex Luther, but for whatever reason, he plays it for high comedy, all full of bitchy, whiny histrionics.  His presence in the movie gets really old, really fast.  Kate Bosworth as Lois Lane makes no impact whatsoever, kind of just fading into the background and screaming really loud when it's required.

Superman Returns also flops with its script and story.  Luther's nefarious scheme this time is to flood the planet while creating a giant island made entirely of kryptonite, thereby anyone who doesn't want to drown will pay top dollar for a place on the last remaining land above water.  The only glaring hole in this plan is the fact that the island he conjures is completely free of plant life.  So, he will be king of a rock where nothing can grow and from which no oxygen will replenish the atmosphere.  Nice one.

The special effects are good, but to what end?  There's been some minor rumblings that a new Superman will actually be made, but if they can't come up with anything better than Superman Returns, they should just give it up.