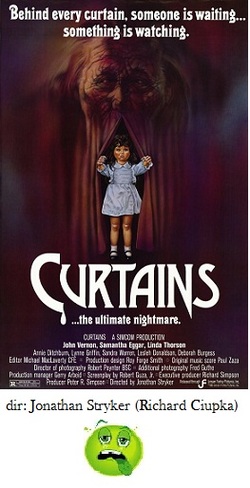 Usually, when a film has such a lengthy and troubled production history, more than likely the finished result turns out to be a disaster.  The Canadian slasher film Curtains had more than its share of behind the scenes difficulties; the original director, Richard Ciupka completely butted heads with the producer which resulted in casting changes, reshoots, rewrites and in-fighting over the film's 'vision'.  Ciupka washed his hands of it, and the producer, Peter Simpson took nearly two more years cobbling together a finished product and finally released it in 1983.

After all of that, one would (and should) assume the worst.  But surprise, Curtains turns out to not be a total trainwreck.  It's not great, mind you, but it does make you wonder how great it might've been had the whole process of making it not been such a trial.

We are first introduced to egotistical film director Jonathan Stryker, played by John Vernon (National Lampoon's Animal House), who is guiding the acting rehearsal of movie star Samantha Sherwood, who is played by British actress Samantha Eggar (The Collector, The Brood).  Stryker is attempting to get financing for his new film, Audra, of which the title role is a dream part for any actress.  But is it a part that an actress might kill for? Sherwood decides to do a bit of method acting and gets herself committed to an asylum, with Stryker's help, in order to really get inside the mind of an insane woman, which the part of Audra calls for, but maybe this trick is working too well.  The longer Sherwood stays inside, the more detached from reality she becomes, so much so that Vernon leaves her there and decides to organize a private casting call up at his secluded mansion in the mountains.  Maybe he can find his Audra this way?

A group of actresses, a mixture of new talent and acting vets, have arrived, except for one young starlet who is butchered in her apartment by a figure wearing a hideous and withered hag mask before making the trip.  Just as the girls are being introduced to us and each other, in walks Eggar, free (escaped) from the asylum at long last.  Needless to say, the killer hag makes her/his appearance again and starts picking off the cast one by one.  Is the killer among the people in the mansion or is it someone else entirely?

The performers, for the most part, are a decent lot; Vernon is particularly odious and Eggar does a great job of appearing completely normal but containing an untapped reservoir of crazy hidden below.  The actresses playing....well, the actresses, are decent but mostly unremarkable, the exceptions being Lesleh Donaldson (Happy Birthday to Me, Funeral Home) as the teenage figure skater, and Lynne Griffin (Black Christmas) as the comedienne.

The direction is, as expected, kind of haphazard.  Earlier tension scenes, such as the death of the actress who never makes it to the call and a broad-daylight attack by the hag wielding a mean sickle, are very well executed; but the very protracted final chase at film's end goes on way too long and pretty much takes all the momentum away.  There are also some loose ends that are never really tied up: Why does the creepy porcelain doll, which is given so much focus earlier in the film, completely forgotten about?  Who helped Eggar escape from the asylum?  When the killer is finally unmasked, no real motives are given, although the final shots of the film could infer a motive, I suppose.  Director Ciupka ended up taking his name off the credits, so officially Curtains is 'directed' by Jonathan Stryker (yes, they used the name of the director in the film as the director of the film).

So what we have here is a film directed by someone who didn't want credit, produced by someone who couldn't keep the project from getting out of control and distributed by a studio that had no faith in it.