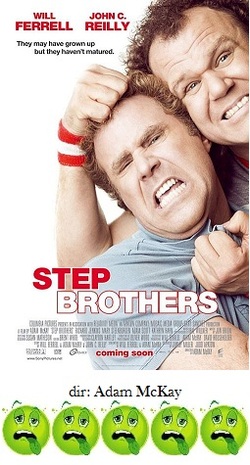 If a comedy is going to rely on one single, solitary, lonely joke to carry the entire movie, it had darned well better be a funny one.  Step Brothers has exactly one joke.  It's not a funny one.

What is the joke?  Will Ferrell and John C. Reilly play forty-ish men who are intellectually and emotionally stunted to the age of 12.  That's about it.

Ferrell's mother and Reilly's father fall in love and plan on getting married and moving in with one another.  The problem is that Ferrell and Reilly still both live at home, are unemployed and can't stand one another...at first.  Then they're the bestest of friends.  But Mommy and Daddy put their feet down and make the 'boys' go out and get jobs.

The first part of the movie has the step brothers constantly fighting and bickering.  Within the first minute it's clear that these guys have turnips for brains, so if watching these grown men acting like that sounds amusing, then this movie is for you because that's all you're going to get.  As the movie plinks this one note over and over and over again, the spirits sink lower and lower as it becomes obvious that Step Brothers has nothing else to offer.

Comedy is so subjective.  Either you laugh or you don't.  For many, the 'comedy of idiocy' represented here is the paragon of funny, after all, Adam Sandler has amassed quite a fortune by basing his entire career on it (and despite bright moments in both Punch-Drunk Love and Funny People, he doesn't seem to be changing course any time soon).

All I can say is, Step Brothers didn't work for me at all.  I struggled mightily to finish watching it.  I genuinely like John C. Reilly, and Will Ferrell impressed me with his terrific performance in Stranger Than Fiction, so here's just hoping that these two will finally leave the miserable stupidity of Step Brothers and get back to doing something worthwhile.