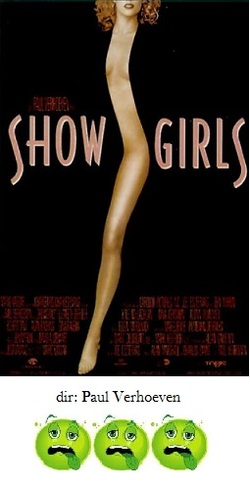 Much ink (literal, figurative or otherwise) has been spilt in analyzing the tremendous failure of Paul Verhoeven's Showgirls.  Yes, Showgirls is wretchedly acted and laughably written and directed with a tin ear by the usually reliable Verhoeven (Basic Instinct, Starship Troopers, Robocop).  So, what happened?

The biggest problem with Showgirls is the script by sleaze-meister Joe Eszterhas.  Eszterhas had some minor success as a screenwriter in the 1980s with such memorable titles as Jagged Edge and Flashdance, but with the meteoric success of Basic Instinct, Eszterhas decided he was the authority on writing films about "strong" women characters.  He cashed some big paychecks for such duds as Sliver, Jade, An Alan Smithee Film: Burn Hollywood Burn , Basic Instinct 2 and the immortal Showgirls.  Yes, the script is chock full of boobs and sex, but brains and taste were in very short supply.  Much was made about the fact that Showgirls was the first big Hollywood NC-17- rated movie to be given a wide release.  Unfortunately, after this was laughed off the screen, studios have shied away from attempting it again.

Former teen-star Elizabeth Berkley decided to make her bid for big-screen stardom as Showgirls's troubled, slutty heroine who arrives in Las Vegas with big dreams of making it big.  She makes something, alright.  In a word, her performance is, well, extreme.  I mean this girl is tense 24/7.  Berkley's performance is fatal to the movie.  To be fair, even A-list mega-stars would never be able to sell this thoroughly unlikeable role, and I have a keen suspicion that Verhoeven had something to do with why Berkley is so exaggerated.  Even doing something like opening a bag of potato chips becomes this outsized, ridiculous, overemoted piece of shtick.  Berkley huffs, Berkley puffs, Berkley snorts, Berkley stomps around, Berkley grimaces, and all of it is laughable.  Other cast members include Kyle McLachlan, Robert Davi and Glenn Plummer and they are all at sea; only Gina Gershon, as the big star of the show that Berkley desperately wants to be a part of, survives the movie intact, probably because she's the only one who doesn't take it seriously.

Is there a plot?  Not really.  It's just the tiresome, overdone story of the poor girl wanting to make it big, but finding out that success isn't all that it's cracked up to be.  Eszterhas simply hauled out all of the tiresome cliches from the myriad of similar films that have been made since the start of the talkies, only with more breasts (even those who lurve the boobies will get tired of looking at Berkley's, even when she darkens them with lipstick right before kicking the crap out of some lunkhead), more sex (check out the scene between Berkley and McLachlan doing it in a swimming pool which sends her into such paroxysms of ecstacy that she flops around the water like a dolphin) and more menstrual blood (don't ask).

Showgirls was a critical and commercial stinker in 1995, eclipsed only by Demi Moore's godawful The Scarlet Letter and the other Eszterhas-penned potboiler, Jade, that was, unbelievably, even slimier.  But Showgirls does succeed at something: it's certainly one of the most entertaining bad movies ever made, but not for any of the reasons Verhoeven, Eszterhas or Berkley intended.