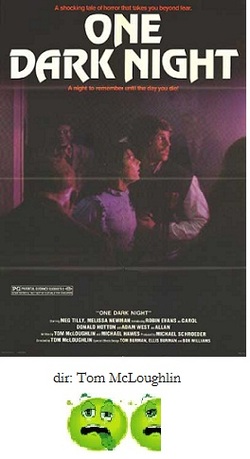 Although not really a terrible film, One Dark Night makes the fatal mistake of spending too much time on plot setup and not enough energy in providing any actual scares...that is until the ending, but by then it's too late.

The story begins intriguingly enough. An elderly former magician named Raymar, is found dead in his appartment from an apparent heart-attack. The bodies of several girls are also found, although they seem to show no cause of death, and there are eating utensils and plates embedded in the walls.
His daughter Olivia has his body interred in the local mausoleum.

Now, one would think this nifty beginning would signal to us that an interesting and terrifying film would follow. Oh, but no. What the real bulk of the film deals with is the initiation of a young pledge who wants to be a member of the most powerful clique in her high school, "The Sisters".

Meg Tilly (before her breakthoughs in The Big Chill and Psycho 2 and was rushed into release), plays the unfortunate pledge. She will do anything to be in "The Sisters", even spend the night in the same mausoleum that Raymar has just been put to rest; although, no one knows about this important detail, yet.

So, basically, for the rest of the movie we are given Tilly creeping through the halls of the mausoleum while the other "Sisters" try and torment her with practical jokes. This "action" is occasionally interrupted with scenes back at Olivia's house, where she and her husband, played by an extremely wooden Adam West, are visited by a reporter who knows what Raymar was up to in his apartment. Raymar used his telekinetic powers to drain the life force from his victims in order to be more powerful, and, although it's not really explained, he is now even more dangerous in death.

And now for the film's climax. Yes, all of the above takes nearly the entire running time to explain and build up to the movie's final 10 minutes.  Raymar's coffin finally bursts free, and he uses his powers to free several other coffins and reanimate the corpses inside. The rotting bodies float through the mausoleum halls and kill off "The Sisters" by crushing and smothering them. He also attempts to drain Tilly of her life force before Olivia runs in and saves the day by redirecting Raymar's power back into himself using a mirror. He melts. The end.

To be fair, the climactic scenes with the reanimated corpses are surprisingly well done and effective. The director obviously knew how to stage shots and use the shadows and music to full effect. Actually, one shot in particular stands out as near horror perfection: two of "The Sisters" have just witnessed the corpses rising from their coffins, and have run through the halls, they are hugging each other out of extreme terror and we see the shadowy hallway, and verrrrry slooooowly begin to see a large group of corpses float from the shadows. Perfect. It's just a shame this terrific climax is crammed back into the tail-end of an otherwise thoroughly mediocre movie.  Even the title, One Dark Night, is so mundane as to induce yawns.

You could do a lot worse in the horror genre than One Dark Night, and it's perfectly fine to waste 90 minutes on it without too much pain involved. Yes, the ending is fun, but to sit through 75 minutes of tedium to get there may not be really worth it.