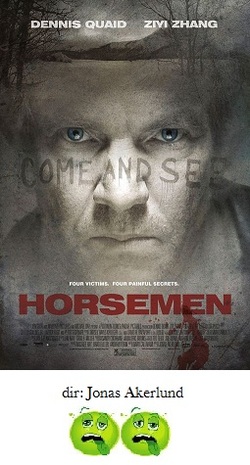 Obviously patterned after the mega-success of David Fincher's brilliant Seven, Horsemen begins strong but completely disintegrates at the halfway point into incoherence and obfuscation.

Dennis Quaid is a troubled detective and widower who is called to investigate a grisly spate of ritualistic killings by person or persons unknown.  The serial killer this time uses the biblical references of the Four Horsemen of the Apocalypse as the template for these deaths.  The first clue involves a tray of freshly extracted teeth on display in the middle of a frozen lake, with the cryptic message "Come and See" scrawled on the surrounding trees.

Next, a wealthy wife and mother is found trussed, gutted and suspended from wires in her bedroom.  With this death we are introduced to two other key characters, Peter Stomare as the creepy husband, and Ziyi Zhang as their adopted, Chinese daughter.

So far so good.  The premise is intriguing, the film drips with atmosphere, and the performances by Quaid and Zhang are quite good.  Actually, there is a majorly surprising 'reveal' regarding Zhang that is both incredibly shocking and unexpected.  But when another suspended victim is found, and a poster of the Four Horsemen is discovered, everything just completely falls apart.

What happened?  It's hard to say.  Suddenly the film whipsaws between various characters who seem integral to the story, but are given no explanation or introduction.  The Four Horsemen are, of course, the focal point of the murders, but somehow the screenplay loses the thread of logic and ties itself into pretzel-knots trying to make some kind of sense and shoehorn the biblical references into an understandable motive, but it fails...miserably.  I would defy anyone to be able to explain this morass of nonsense.  Clues involve symbolic necklaces, colored lights, the teeth, the poster, a mysterious pregnancy, some illicit sex photos,and  non-existent threads between various characters and victims.  The most insulting part of Horsemen, though, is the finale, when the identity of the grand master of this half-baked parade of pretentious twaddle is revealed.  I wouldn't dream of telling you who it is, but just be prepared for some serious groaning.  It's one, big, screaming fail.

Horsemen was barely released in theatres before being unceremoniously dumped onto DVD shelves shortly afterwards.  To be honest, many, many worse films get the full 2,000 screen release (take Al Pacino's laughably wretched 88 Minutes as an example).  Apparently, there was a lot of heavy post-production reshoots and re-editing to try to shape Horsemen into some sort of releasable form, and it shows.

It's probably best to just press the STOP button about 40 minutes into Horsemen and then just think of a conclusion on your own, because nothing you can think of could be more feeble than what was filmed.