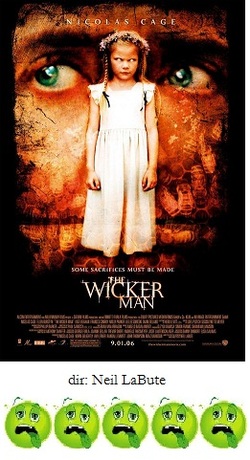 So bad it’s good?  More like, so bad it’s awesome!  Really, I haven’t laughed so much during a movie in quite a long time, and no, this isn’t a comedy.  As awful as most of the recent batch of classic horror movie remakes have been (Prom Night, The Fog, The Amityville Horror, ad nauseum) none have reached the lunatic heights (or is it depths?) of director Neil LaBute’s ridiculous The Wicker Man.

The original 1973 film The Wicker Man is justifiably considered one of the greatest cinematic thrillers of all time with what is the best performance of Christopher Lee’s distinguished career.  The film brilliantly mixed the genre elements of horror, mystery, musical, and the religious (both Christian and Pagan) into an altogether original and startling experience.  Naturally, this remake takes all of the qualities that made the original great, disposes of them, and then fills in the gaps with tiresome plot contrivances, like so much spackling paste.  But these mistakes would only lift The Wicker Man into the realm of misguided and mediocre; it sails into the stratosphere of bad movie heaven with the crazed performances of the cast and the many, many unintentional laughs.

The very basics of the plot are similar, but the likenesses pretty much stop there.  Nicolas Cage (at the very beginning of his current career free-fall) stars as a police officer who receives a letter (in this version the letter is from one of his past lovers, in the original the letter was anonymous) urging him to travel to the mysterious Summersisle to look for a young girl who’s missing and may be in serious danger.  Anyway, he arrives on this strange locale, whose inhabitants are matriarchal pagans of some sort, with Ellen Burstyn of all people, in the Christopher Lee role, as their leader.

Get ready for full-frontal, in your face, Cage histrionics; he goes from mumble to shriek in about six seconds, sometimes yo-yoing back and forth several times in any given scene.  He runs around the island hysterically, whether it’s freaking out over birds and frogs, fleeing from bees (this island harvests honey), screeching lines like “How’d it GET BURNED!! HOW’D IT GET BURNED!!!!” (uh, fire usually burns stuff, Nic), pummeling Leelee Sobieski in a fist-fight, or infiltrating a religious procession while wearing a bear costume (don’t ask).  Burstyn’s his equal, especially when she is forced to wander the scenery with a teased out wig and half of her face painted blue.

As if this retread hadn’t already dumbed everything down to a pre-school reading level, but when the big, climactic ending finally arrives, the script throws in a horrendous amount of obvious exposition, as if everything wasn’t already perfectly clear. You know, just in case we didn’t get it, already.

I can’t recommend The Wicker Man to anyone looking for a great film, or anyone who cherishes the original; however, this movie is positively begging  to have a drinking game formed around it.  Completely plastered is the best condition to view it in.