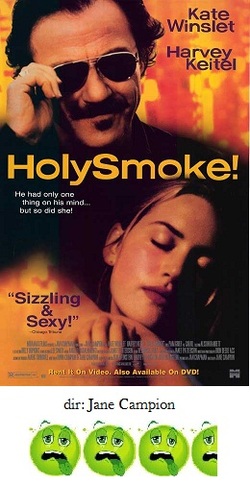 Director Jane Campion has simply lost her mind. In her  film, Holy Smoke, she has everything going for her, a great cast, an intriguing plot and, after The Piano and Portrait of a Lady, the clout to do whatever film she wanted. Boy, did she drop the ball this time.

Holy Smoke tells the story of a young Australian girl, played by Kate Winslet, who, while on a trip to India, falls under the influence of a local religious guru. Her family schemes to bring her back home and have her deprogrammed by a world reknowned expert, played by Harvey Keitel.

Now I was expecting real dramatic and acting fireworks. A tete-a-tete out in the desert with Keitel attempting to get inside the brain of Winslet and bring her back to reality. But Campion had other intentions obviously, and the film suffers terminably for it.  Campion, see, wants to use this plot to make bold "statements" about men and women; and she fails, catastrophically. All of her arty pretentions, and indie attitudes come rushing out full force, turning a potentially volatile piece of film into an embarrassing shambles.

It all begins well enough. After Winslet is brought back home, having been tricked into thinking her father is dying, her family hands her off to Keitel who then whisks her away into a small house in the Outback. He begins to try and deconstruct her brain and bring her back from the mental clutches of the guru. First he burns her sari and makes her take the "third eye" from her forehead, and they begin to talk. At this point I was gripped. The acting was top notch, the scenery was breathtaking and I sat at attention waiting for sparks to fly.  But then everything goes wrong. For some reason, Campion makes Keitel's character a horny bastard who has sex immediately with Winslet's sister-in-law for no good reason. Keitel's character is supposed to be world reknowned in his field, an expert, but the screenplay gives him such boneheaded things to do. At one point, Winslet's brothers show up to take her out to a local bar. And Keitel lets her! She is supposed to be extremely mentally fragile during the deprogramming, cut off from everything to bring her back to reality, but he lets her go dancing and drinking anyway.

To compound this ridiculousness, upon arriving back to the safehouse, Winslet burns her sari and stumbles in the desert buck naked and sobbing uncontrollably. Keitel arrives to console her, only to have her piss down her leg and fall into his arms. Then they too have sex.  Whatever. It's a quick downhill slide from there. Campion thinks this war between the sexes is actually interesting, I guess. But it's downright laughable. If you can keep from snickering at a naked, pissing Winslet, try again after watching Keitel wander through the desert wearing a bright red cocktail dress!!  How profound! How deep! Nope. Just damned silly. Eye-rollingly hilarious. Campion pulls out all of the film-school tricks she can to make this story "important", but it doesn't work.

Winslet and Keitel perform admirably under the circumstances, but the characters are unflattering and unfocused. The script needed heavy doctoring before anyone attempted to film it.

Hopefully, with this ego-trip out her system, Campion can go back to doing good movies again.  If you want to see a good movie about the same subject, try to find Split Image from 1982 and starring James Woods to see how a similar story can be done right.