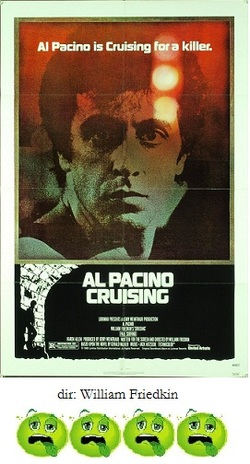 Some movies make you feel like taking a shower after watching them. William Friedkin's Cruising makes you want to be blasted with a firehose and scrubbed with bleach and a wire brush a la Silkwood.

In 1980, Cruising was greeted with unheralded controversy while it was being filmed.  Protest groups tried to get production stopped, and even star Al Pacino wanted out. But it was completed and released and promptly bombed sending Friedkin into a creative tailspin he has never recovered from.

Pacino stars as a New York City cop who goes undercover to infiltrate the gay underworld and capture a serial killer. The opening scenes of the movie pretty much set the dreary, ugly tone. The soon-to-be victim picks up the killer and takes him to a local motel. After they romp, the killer ties the man up and graphically stabs him in the back in loving closeup as he screams and blood spurts out of his wounds. Nice.

Anyway, Pacino begins to make the rounds in the seedy leather clubs, randomly picking up guys he thinks may be the killer. Considering the script forgets to really give him any leads or clues, it's a wonder how the investigation can possibly progress. Pacino just goes from club to club, looking embalmed (he truly looks like he wanted out of this picture in the worst way).

While all of this is going on, the killer continues on his merry way. Eventually Pacino discovers who the killer is and solves the case. He just happens to guess the killer's identity, and even though the killer's voice is heard throughout the flick, it doesn't really jibe (which was a directoral 'choice' that serves only to muddy already very murky waters). No matter. Cruising is just an exercise in offensive ugliness. Every gay man in the movie is shown as perverted, depraved, a leather freak, a hustler or just plain weird.  Friedkin tried to divert the controversy by putting a disclaimer at the beginning of the movie, but that hardly makes any difference. Worst of all, the ending tries to convey that since Pacino has been exposed to this lifestyle so much he is now a killer himself.

Cruising is full of grisly violence (various stabbings, body parts floating in the ocean etc.), bizarre sex acts, and even subplots that only exist to make everything even more depraved (two men masquerading as cops pick up a couple of drag queens and force them into sexual favors to avoid arrest "Come up here and I'll show you my nightstick").  Grim and vile in equal measures, everyone involved should hang their heads in shame.