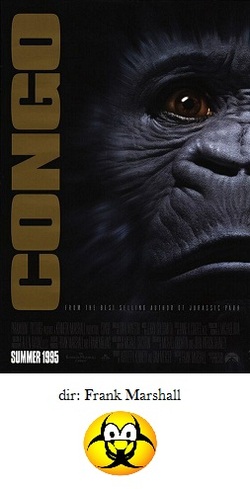 After the international success of the film version of Michael Crichton's novel Jurassic Park, studios began snapping up the rights to adapt more of his works.  So we were subjected to the toothless Jurassic Park sequel The Lost World, the underwhelming mystery of Rising Sun, the bloated undersea thriller Sphere and the flat drama Disclosure.  But the worst of the lot was, by far, the inept jungle adventure story, Congo.

Congo is a disaster on every level.  The acting is bad, the story is uninteresting, the special effects are less than special, and the sets all look like they were duct-taped together from discarded parts from old Land of the Lost episodes.

Laura Linney heads a rescue mission into the dark African jungle to save a group of explorers who were sent in to recover a rare diamond.  Also on hand are Ernie Hudson as a jungle guide, Tim Curry as a Romanian treasure hunter (absurdly named Herkermer Homolka), and Dylan Walsh, an animal trainer who has brought along a gorilla named Amy that has a device on her hand that vocalizes the sign language she's learned.  After the film is barely ten minutes along the constant, whiny computerized voice chirping "Amy hungry! Amy pretty!" is enough to make you want to hire a poacher to cut off her hands.  But it's all gets so much worse.

As this group treks through the jungles they encounter African tribesmen, corrupt militias, a group of men in animatronic gorilla suits and a foam-rubber hippo attack.  Their path leads them to the lost city of Zinj where all that remains are tennis ball-sized diamonds and a band of men in even more moth-eaten looking gray gorilla suits.  As if this weren't peril enough, there is also a convenient volcanic eruption that spews badly animated lava through the crumbling plastic and balsa wood city as the gray gorillas do their best to push each other into it.

Of the cast, only Linney escapes this fiasco with any dignity intact; Walsh is a non-presence and Hudson seems bemused by the nonsense.  The big booby prize though goes to Curry.  He not only chews the scenery, he lays it on a plate, pulls up a chair and dines on it.  Couple this with the annoying habit of Curry and all of the other characters repeating his character's idiotic name constantly, and what's left is a character the audience cannot wait to see get his skull bashed in by a phony gorilla.  Which he does.

Congo is such a cheap and dunderheaded piece of junk that it's no surprise that its director, Frank Marshall, who's had much better success as a producer, has only directed one other film after its debut (the Disney sled-dogging drama, Eight Below).  Luckily for us, Hollywood has stopped clammoring to adapt many more Crichton novels; after all, if the results are usually more Congo than Jurassic Park, then why bother?