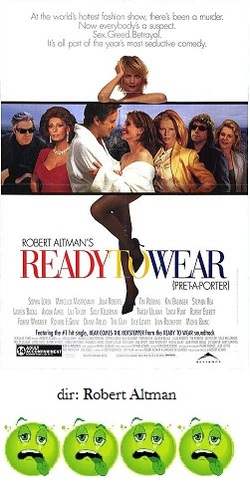 The late, great director Robert Altman was a man who always swung for the fences.  However, with that go-for-broke philosophy there was always an increased risk for failure, and for every home run classic, such as Nashville, McCabe & Mrs. Miller, The Player or Short Cuts, there was a tragic strike out, like Brewster McCloud, Beyond Therapy, Quintet and O.C. & Stiggs.  Unfortunately, his eager take on the fashion world, Ready to Wear, was a horrid miscalculation.

After The Player resurrected Atlman's career in 1992, as well as the follow up, 1993's Short Cuts, everyone was expecting the ball to keep on rolling.  It didn't.  Ready to Wear is a bloated, unfocused, nonsensical and throughly empty movie-going experience.  So much talent is on hand for so little payoff.

About all I can say for sure is that Ready to Wear takes place in Paris during the international fashion extravaganza.  Beyond that?  Who knows.  The movie wanders around the dozens of characters as they interact with one another and that would be just fine if these characters were interesting in the slightest.  Nashville did much the same thing, but in that movie, the characters had interesting things to say and looked, sounded and felt real.  Not a single person in Ready to Wear is worth spending any time with.  They are all one-dimensional and boring and there's not a single line of dialogue worth hearing.

Let see, we have Jean-Pierre Cassel as a designer who dies at the beginning of the film and Marcello Mastroianni as a man who fears he will be blamed for that death and skulks around in the background throughout the movie until he has a non-romantic interlude with Cassel's wife Sophia Loren.  Forest Whitaker and Richard E. Grant are designers who have a secret infatuation with one another, Stephen Rea as a designer who likes to humilate magazine editors Linda Hunt, Sally Kellerman and Tracey Ullman, Kim Basinger as a television reporter, and Tim Robbins and Julia Roberts as reporters who spend the entire movie having sex in a hotel room,   Also on hand in lesser, forgettable roles are Lili Taylor, Anouk Aimee, Rupert Everett, Lauren Bacall, Lyle Lovett, Danny Aiello (in drag!), Teri Garr, and others.  Other celebrities make appearances as themselves but they don't add anything.

Ready to Wear meanders around all of these people trying desperately to drum up some excitement.  What is it all about?  What is Altman's attitude about fashion?  It becomes clear that he doesn't have one.  Or should I say the general attitude is that fashion is dumb and those that follow it are morons.  That's about it.  You know the movie has so little inspiration or ambition when the big running gag throughout it revolves around the number of times characters step in piles of dog crap.  Yes, this happens a lot.  The big finale occurs during a penultimate fashion show where the models are sent down the runway completely naked.  Naturally, this ellicits a standing ovation.

At the end of 1994, Ready to Wear was a greatly anticipated event film that was being heralded as the film to beat for the Best Picture Oscar.  That is, until it actually opened and critics and audiences finally got a good look at it.  The film turned into a financial and critical flop that was quietly swept under the rug.  In fact, the film's soundtrack probably made more money.

Originally, the movie was to be titled Pret-a-Porter (French for Ready to Wear).  At least, by changing it back to the English, one layer of pretention was eliminated.  Now, if only the movie went through the editing machine a few dozen more times....