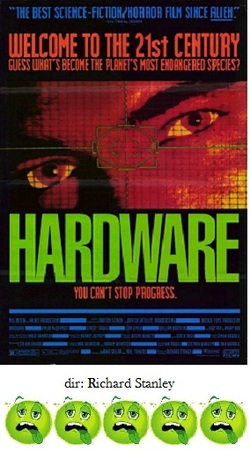 Don't let the poster art fool you into thinking Hardware is an epically apocalyptic, action-packed, science fiction classic.  It's anything but.  Hardware is a dreary, slow slog, and 99% of it takes place entirely inside one chick's apartment.  Rarely has so much energy and effort been expended for so much nothing.

Hardware takes place in your typical, cliched, post-apocalyptic future where everything is bombed out, filthy and despairing.  Dylan McDermott obtains a robot head from a scrap metal salvage shop and then gives it to his girlfriend, Stacey Travis.  See, she's an 'artist' and places the robot head within one of her sculptures.  Basically, the robot head is not entirely non-functioning, and we wait until the inevitable moment when it wakes completely up to cause mayhem.  Oh yeah, of course this particular robot head is part of some secret military program to create the perfect artificial assassin or something.

And we wait....and wait....and wait some more.  This is one slowly self-resuscitating robot head.  While we do this waiting, we watch as nothing else is happening on screen.  Sure, there's some dialogue between Travis and McDermott about the state of the world they live in and their relationship issues while we occasionally get to 'see' these two dopes through the robot's eyes while they wander around the apartment and occasionally shower and/or screw.

Eventually, at long, long last, the robot has repaired itself and has Travis trapped in her apartment, unable to escape, and the random neighbor or associate pops over to immediately get eviscerated.  These kill scenes aren't particularly well done, what with the dingy lighting design and incoherent editing, but at least something is happening on screen.  McDermott battles the bot and saves Travis...end of movie.

Somehow, Hardware has developed a bit of cred as a cult film and I am flummoxed as to why.  There is no action and there are no scares...at all. You'd have to look long and hard to find an action, sci-fi movie with less entertainment value than this one.