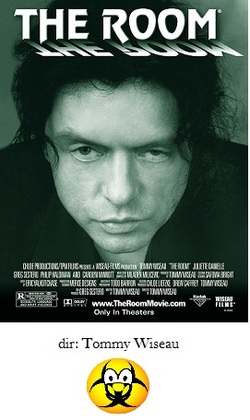 I can tell you that Tommy Wiseau's The Room is the biggest cult film going today, and it can still be found in theatres and college campuses around the country.  It also takes the Rocky Horror torch with devoted fans that arrive at midnight screenings dressed as various characters and bringing props.  For me, though, I can't imagine sitting through it a second time, let alone the dozens of viewings many are already claiming.

The Room is one of those bad movies that is nearly impossible to describe into words the experience of watching it.  It's so far beyond incompetent, that about all I can do is try to describe the events as they happen, such as they are.

Tommy Wiseau not only directed The Room, but he wrote, produced and stars in it as well.  As the movie opens, Wiseau arrives at his apartment that he shares with his fiancee Juliette Danielle.  He has bought her a nightie and they go up to their bedroom for sex.  Sex is briefly interrupted by teen neighbor Philip Haldiman, who "likes to watch", but he is sent on his way and our lovers proceed to screw for about 5 full minutes while a very dreadful smooth soul tune blares on the soundtrack and the ever-moving camera spins around the bed filming through gauzy sheets.  This is followed by another sex scene between Danielle and Greg Sestero, who plays Wiseau's "best friend" (we know this because it is mentioned about a thousand times), which is shot on the stairwell....cue another dreadful song and spinning camera.  And then this is followed by a THIRD sex scene between Danielle and Wiseau which is essentially like the first.  So, what's the plot?  Danielle doesn't love Wiseau anymore and wants to be with Sestero.  Excitement.

But The Room is less about story and more about incompetence in every department.  The screenplay?  Laughable.  Just about every scene begins with someone opening the front door followed by "Hi,____", "Oh, Hi_____"  Every character in the movie talks about how wonderful Wiseau is and that Danielle shouldn't dump him ("But I don't love him" is also repeated about a thousand times).  Carolyn Minnot plays Danielle's mother who warns her daughter that "Marriage doesn't have anything to do with love" and "I haven't been happy since my first marriage", then she casually mentions she's dying of breast cancer, but like every other plot point it's forgotten about in record time.  Also disregarded is Haldiman's drug problem; he's assaulted by a criminal on the roof of their apartment building, but is saved from injury when EVERY SINGLE CHARACTER suddenly bursts through the door to stop him (Is Haldiman a dealer? A user?  we never know).  It's mentioned that Haldiman has been sort of adopted by Wiseau, who pays his rent and is going to pay for his tuition regardless of the fact that his job consists of "doing deals" at a bank.  Wiseau should hold off on the tuition because, as written, Haldiman comes off as if his character is either brain-damaged or emotionally stunted at the age of 11.  He constantly wants to "play football" that consists of standing about three feet away from others and tossing a ball (and yes, at one point someone does get injured).  One "football game" has Wiseau, Sestero, Haldiman and another character standing in an alley and tossing the ball while wearing tuxedos.  Why?  Wedding photos, despite the many times we're told the wedding is months away.  Anyway, Wiseau finds out about Danielle and Sestero and then screams and wrecks his bedroom before eating a bullet.

The insanity described above doesn't even scratch the surface of the ineptitude on display in The Room.  The acting by all involved is wretched beyond belief, the worst being the deeply creepy and unappealing Wiseau himself who punctuates almost every line with a bizarre, unsettling chuckle (not to mention his strange, undefined accent).  All the characters just enter a room, stiffly deliver the awful dialogue, and then exit.  With the exception of the dizzying sex scenes, the camerawork is also embalmed.  And the score consists of  musical cues that even soap operas would find overwrought

And there is still more.  But there's just not enough space here to go into it all.  You'll just have to experience The Room for yourself to really appreciate how horrific an independent ego-trip could be.