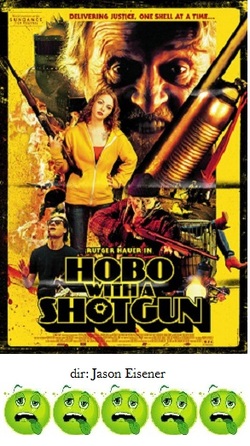 Before I get any hate mail from those who think I am a prude when it comes to movie violence, I want to assure them I'm not.  Screen violence, like anything else, can be done well or done poorly.  I greatly admire films like The Evil Dead, Natural Born Killers, or any other film that uses violence, no matter how extreme, with an actual point of view and  a reason behind it.  Hobo With a Shotgun presents its violence like that of a child that tears the wings off of butterflies.  It's the "ha, ha", rub your nose in it school of screen carnage.

Based on a fake trailer from the Grindhouse double-feature, Hobo With a Shotgun is about a hobo (Rutger Hauer) who happens upon a city that is overrun by corruption and the violence caused by a certain crime family. After being incensed and disgusted by all of the goings-on, he grabs a shotgun (and other weapons) to clean it all up.

I know that the violence in Hobo With a Shotgun is so over the top that it shouldn't be taken seriously; however, it's one thing to use it satirically, it's quite another to wallow in it while continuously winking at the audience.  It's as if the director, Jason Eisener, is constanly piling on one grotesquerie after another while shouting "Are you disgusted, now?  How about now?  You think that's repulsive, how about this?  If you're not laughing, you don't get it!"

There's only so many times one can watch heads being ripped off or squashed like ripe melons, heads and limbs blown apart by shotgun blasts, throats slashed with hacksaws, pedophiles in Santa costumes abducting kids, homeless people set ablaze, and so on, and on, and on, and on, without end.  The real low point among low points comes when one of the baddies hijacks a school bus full of children and then cooks them all alive with a flamethrower.  "Woo-hoo, ain't that a riot?" bellows Eisener.

Maybe if there were anything more to the movie, my reaction would've been different.  But there isn't.  It exists only as a stylistic exercise.  The script is negligible, the acting is inconsistent (some characters seem to be taking the film very seriously while others chew the scenery with gusto, which also confuses the issue of what the film's purpose really is), and any care in the cinematography or editing departments is thrown out the window.  The only purpose, it seems, is to see just how much blood and brains can be splattered on the screen in any one movie.

Hobo With a Shotgun should've just remained an amusing trailer; after all, 2 minutes of this crap is all anyone should be subjected to.  It's just another movie that requires a hot shower afterwards to wash away the thick layer of grime the accumulates from simply having watched it.