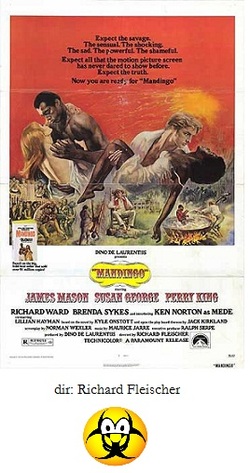 Every once in a while you stumble upon a movie that leaves you completely speechless. A movie that, while it's unfolding before your eyes, you sit in stunned silence with only an occasional "My God!" escaping from your lips. Mandingo is such a movie. A film that's so hilarious and hysterically offensive that it's a wonder that African-Americans nationwide didn't storm Paramount studios and slaughter the executives who green-lighted it.

Based on the novel by Kyle Onstott, Mandingo is sort of a revisionist slavery epic set in Louisiana. The father-son plantation owners, played by James Mason and Perry King, respectively, are needin' some slaves. The beginning of the film sets the tone, a slave inspecter goes down the line of men and physically looks them over like horses, now I know that, historically, this is accurate, but I don't know how accurate it is when the inspecter even orders a slave boy to drop trou and bend over so he can look for hemorrhoids.

When we get to the slave women, or as they are called here "wenches", it is basically a matter of how good they are in the sack. As Mason so eloquently puts it, "It's Master's duty to pleasure the wenches first time!" But because of the truly horrible accent, "Master's" should be pronounced as "Masser's". Anyway, King decides he likes a certain wench played by Barbara Sykes and brings her home to be his regular "bed wench".

Bad enough you say? Oh, but wait! Mason's doctor tells him that he has rheumatism, or as it is said here, "the rheumatiz". His prescription? Mason is to use slave boys as footstools so that the rheumatiz can be drawn out of his feet, so for the rest of the movie we get lovely images of Mason basically sitting around with his feet propped up on the boys' chests.

Anyway, another slave auction is afoot, and a Mandingo is up for sale. Apparantly, Mandingo is a type of slave breed that is of highest quality, so of course this top male Mandingo (a stunningly untalented Ken Norton), causes a bidding war. To get a good idea of how physically gifted he is, a German woman sticks her hand down the front of his loincloth to check his, er, equipment. However, Mason and King win Norton and take him home, but they are worried that he is "hung so big he'll tear the wenches."

So far, so offensive. But things gear up into the high camp stratosphere with the addition of Susan George who plays Blanche, a rich plantation owner's daughter, who is set to marry Perry King. Since he's got a perfectly good "bed wench", he's not too excited about this. The performance by Susan George is so bad, so overwrought, so, well, out-there, that every line she utters illicits peals of laughter. Every look, every gesture, everything that George does is just too, too much. Especially when she gets jealous of Sykes, calls her a baboon, and gleefully beats her with a switch before pushing her down the stairs.

Well, to wrap things up, lonely Susan George eventually beds Norton and, of course, gets pregnant. After she gives birth ("it come, but it ain't white"), the baby is killed and a jealous Perry King poisons her (boy, was I happy when she was finally dispatched). King then shoots Norton, accidently killing Mason in the process, before pitchforking him to death in a boiling cauldron of water.

Shew-wee! Mandingo is a southern-fried stinkbomb that is almost gleeful in its shamelessness. I still find it hard to believe it actually got made. Of course, this movie was produced by Dino DiLaurentiis, who specialized in adapting unfilmable material for the screen before he went bankrupt, and directed by Richard Fleischer who went on to direct the fine feature films The Jazz Singer, Amityville 3-D, and Red Sonja.  So, yeah, his record is just a little spotty.