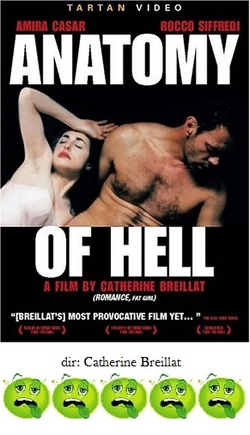 Catherine Breillat's French think-piece, Anatomy of Hell is, bar none, the silliest, most pretentious film to examine the differences between the sexes.  To make matters even worse, it does all it can to make those in the audience, men and women alike, toss their cookies.

For many, the promise of explicit nudity and graphic sexuality will be reason enough to tune in, but Anatomy of Hell is like a cinematic cold shower.  It's simply a two character piece about a nameless man and woman (Rocco Siffredi and Amira Casar) and it focused on them for four nights.  They meet at a gay dance club (he's homosexual) where Siffredi finds Casar slashing her wrists in the bathroom.  Why?  "Because I'm a woman," says she.  She offers to pay him if he'll come to her home and "watch her."  Or more precisely, watch and explore her naked flesh and discuss how men brutalize women.  Yes, they both get naked and, yes, there is much graphic humping; however, if you don't have a fetish for bodily fluids and secretions, this isn't going to be a turn-on.

Even with all of this angry sexuality, Anatomy of Hell will reduce most viewers to much eye-rolling and supressed laughter.  The arch, self-important dialogue has to be heard (or read in subtitles) to be believed.  Siffredi talks about how "the fragility of female flesh inspires disgust or brutality," and describes female genitalia as having "the sloppy, shapeless aspect of your hidden lips" with a "pestilential skin, like the skin of frogs.  Frogs, at least, have the decency of being green."  So deep and very French!  Casar isn't much better, claiming "the veils men adorn us with ritually antcipate our shrouds."  It's enough to give you a migraine.

On the clinical side of things, Siffredi shoves his fingers into Casar and rubs the sticky, vaginal juices into his hair, then takes Casar's lipstick and draws a circle around her vagina and anus (all in close-up detail of course).  At one point he penetrates her with the handle of a garden hoe, and another he covers his fingers in her menstrual blood and licks them clean.  Casar later pulls out her bloody tampon, soaks it in a glass of water and then the two of them share a drink of the cloudy, pink results; after all, as Casar says, "Don't we drink the blood of our enemies?"

And there's much, much more, and all of it is revolting.  I'm not at all sure what Breillat's thought she was going to achieve with this artsy-fartsy mess.  Anatomy of Hell is, I suppose, one of a kind, but in this case, it's because no one else would bother.