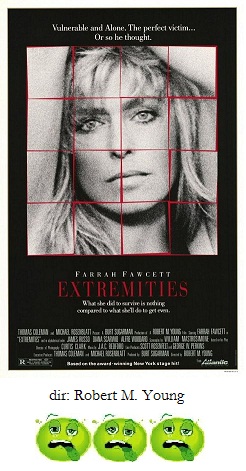 How badly confused is Extremities, you ask? Well, it's the only revenge flick I can think of where you begin to sense that maybe, just maybe, the victim is more sick and twisted than the perpetrator. The plot plays out as if the two main players divised some sort of kinky S&M role-playing thing but forgot to let anyone else in on it.

The flick starts out with Fawcett being abducted by evil John Russo when he hides in the back seat of her dinky car (I won't even get started on how unperceptive you have to be to NOT notice a hulking figure wedged in the backseat of your VW Rabbit, but never mind). Anyway, Russo ties a belt around Fawcett's neck, threatens her with a knife and forces her to give him a hand-job. She manages to escape throttling, stabbing or even soiled palms and immediately high-tails it to the police station to report the crime.  It's in this scene that we are given the first glimpse to how absolutely bone-headed this script is. You see, the police will only report that she was assaulted, but won't report that the guy had a knife. Why? Because, otherwise Fawcett would actually get a little police protection, but since that won't do for this story, the cops are treated as completely unwilling to help. Maybe this is true to some degree, but not like it's portrayed here, I'm sure.

Anyway, Russo finds out where Fawcett lives, tracks her down and insinuates himself inside the house. He then starts beating her anew, making her wear a nightie, and make him breakfast (?). Just when you think she's done for, she sprays him in the face with insecticide and locks him up inside her huge fireplace (??). What will Farrah do? Well, dig a grave in the garden and bury him alive, of course!

Enter Farrah's roommates. First comes Diana Scarwid, who takes the Worst Performance award from Fawcett and Russo, which on it's own is one thing, but actually seeing the flick is something else entirely. Next comes Alfre Woodard, who manages to be just as good as she normally is amidst a film that's collapsing down around her. These two, I guess, sort of represent the inner turmoil Fawcett is facing in regards to Russo's fate. Scarwid is the hysteric, Woodward is the sensible type, and for the next hour the four characters talk and talk and talk about 'what should be done'.

Scarwid's performance is wretched, But her character is written so stupidly in might not be her fault. While Fawcett digs the grave, Scarwid sits in the living room, swills vodka and sobs while Russo tells her inane lies about him being an ice cream truck driver who only stopped in to use the phone. And SHE BELIEVES HIM!!!! So within the space of, oh, ten seconds she believes the word of a bruised up guy locked in the fireplace over her best friend. Sure.

I would go into more detail about what happens, but suffice it to say, Farrah begins taking such perverse joy in turning the tables on Russo, smacking him around and jabbing him with a knife, that I couldn't help but wonder if maybe this was the story of a couple of sado-masochists who were doing this for kicks and were really just messing with Scarwid and Woodward's heads. This is certainly deeper than anything that's on the screen, that's for sure.

Extremities is based on some off-Broadway play that Fawcett did that earned raves, but in my opinion it should have stayed there.  If you are in the market for watching a couple of moronic people beating the tar out one another, then by all means, see it.  But then again, it may give you some sex game ideas that are better left unexplored.