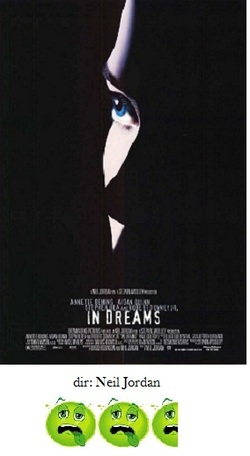 Ok, would someone PLEASE explain to me what this movie is about? In Dreams is an extremely confused and garbled psychodrama that completely wastes a talented cast, and instead invests so much energy in ludicrous plot devices and imagery. This movie is definitely an art director's and cinematographer's wet dream. Director Neil Jordan just couldn't say "enough is enough".

Loosely adapted from Bari Wood's novel Doll's Eyes (as a friend told me, the only thing they have in common is that they were both written in English), In Dreams stars Annette Bening as a trouble woman who has strange visions involving a man leading a girl through an apple orchard. Turns out the vision is of a serial killer that just so happens to now have murdered Bening's daughter.

There is lots of nice lighting and imagery in the film's developing scenes and I was intrigued by the story. But then almost immediately the film begins to veer wildly off course. Bening starts to have other visions and dreams of the killer, and all of the sudden she is beseiged by apples. No kidding. Apples show up everywhere. On the computer, on the kitchen table, on the backyard swing, even her garbage disposal starts to spew apple juice.  Mix this hooey with a disappearing/reappearing dog, a small town that was flooded in the 60s to make a reservoir, a nursery rhyme about "My father was a dollar", two daring escapes from mental institutions, some really badly laid wallpaper, a huge abandonded hotel on the beach, another missing child, and Robert Downey Jr. as the killer dressing Bening up like his mother. What do you get? A big ol' mess.

The whole film just totally collapses under the weight of all these plot threads which, in turn, causes the film to move at a slug's pace. The performances by Bening and Aidan Quinn, as her husband, are quite good. Downey, however, shows up in the film's last 20 minutes and mumbles incomprehensibly about wanting a family, until the final chase scene on a bridge where he and Bening fall into the reservoir.   While underwater, Bening sees the ghostly vision of her dead daughter. But it's left totally unclear whether she dies or not, however when Downey is locked away in the mental hospital at the very end, blood spurts from the walls and Bening's voice is heard taunting him. Revenge from beyond the grave? Acid flashback? Tainted prison food? Who can tell.

Apples definitely deserve better than this.