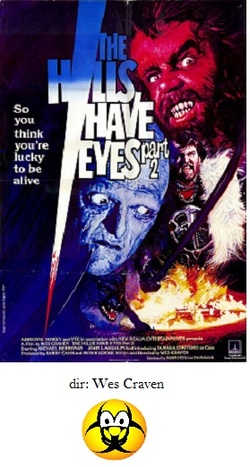 If you didn't know any better, you'd think The Hills Have Eyes Part 2 was some sort of direct to video release cobbled together by some no-name hack on a budget of about a buck fifty.  It gives new meaning to the term 'bargain basement.'  But, no.  Wes Craven, the director of the original The Hills Have Eyes, threw this junk together.

The Hills Have Eyes was a 1977 low-budget, but viscerally effective chiller that helped put Wes Craven on the map (along with Last House on the Left) as a new voice in horror cinema.  For a follow-up, Craven could've taken the story into any number of exciting directions.  So, it's completely galling that he decided the best way to continue the story was to turn it into a brain-dead, routine slasher movie that made most of the other dead teenager movies of that era seem like true works of art.

Janus Blyth continues her role as the girl savage from the original, who now has returned to normal society, and Robert Houston is also back as Bobby, one of the survivors from the original.  These two are involved with a group of motocross racers (?), comprised of a bunch of zero-talent young men and women, or as we like to call them, dead meat.  This group, sans Houston, who's too freaked out that the next motocross race is too near the desert location where the events of the first movie took place, set out for the race and of course find themselves broke down in the middle of nowhere.  No guesses as to who's lurking about in them thar hills, but then, since all of the baddies supposedly died in the original, their presence is kind of unexplainable.  Anyway, darkness falls and the savages kill off these losers one by one.

Now, most of these events happen in the last half of the movie.  The first half is almost entirely comprised of "memories" (extended footage from the original The Hills Have Eyes) that serve only to pad the running time and fool us into thinking there was actually enough here to make a feature-length film.  So we get flashback memory after flashback memory from Janus, from Houston and, most laughable of all, from Beast, the original surviving German shepherd.  I would say that at least a third of The Hills Have Eyes Part 2 is comprised of footage from the first film.  Why bother?

The fact that Wes Craven really thought The Hills Have Eyes Part 2 was in an anywhere near a releasable form is probably the most depressing fact of all.