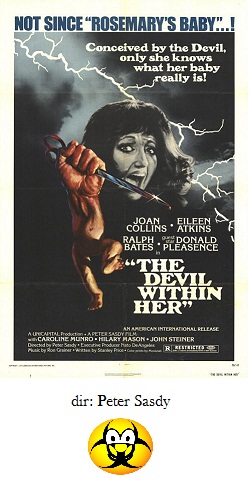 Here is, without a doubt, the looniest, most inept and unintentionally hilarious attempt to cash in on the immense popularity of Rosemary's Baby and The Exorcist.  Confusingly enough, The Devil Within Her is also known as Sharon's Baby, The Monster or I Don't Want to be Born, and another rip-off from the same era, Beyond the Door, was also released as The Devil Within Her.  In either case you're getting a dog, only this one is funnier.

Let's see if I can drean some coherence out of the plot.  The Devil Within Her stars Joan Collins and Ralph Bates as a couple who've just been 'blessed' with the birth of their son.  At first, all is hunky-dory, but soon Collins begins to think there's something wrong with the baby.  You see, she keeps hearing unholy shrieks up in the nursery only to find the room completely demolished and the little boy happy as a clam in the crib.  Plus it scratches and punches those its angry at.  Any particularly odd or violent thing that happens is always followed by a close-up of the tot's innocent face, as if saying "Who? Me?"

Pretty soon, people start dying.  First, the infant pushes the nanny into a river, and then it kills Bates by somehow scurrying up a tree, fashioning a noose and strangling him before dragging his dead body down into a storm drain.  Donald Pleasance, as the obstetrician who delivered the infant, is also, somehow, decapitated by a shovel.  In the grand finale, the baby ends up stalking Collins and then knifing her to death followed by an exorcism by Eileen Atkins as Bates's nun sister.

So, why is this baby so evil?  Well, it's like this.  Before Collins got married, she was working as some sort of showgirl.  Her laughable 'act' seemed to entail twirling around the stage dressed as a gypsy along with a dwarf sidekick in a jester outfit.  Anyway, one night, said dwarf (named Hercules) makes a pass at Collins who, naturally, rebuffs him.  This causes him to seethe with rage and put a curse on her womb.  So, yeah, the murderous baby is being controlled by some evil dwarf spirit (despite the fact that he is still very much alive) or something.  It's just all so ridiculous.

As would be expected, the acting by the cast is abysmal (although, I can't see how even really talented performers could make any of this material work).  Collins is all high-strung, teeth-gnashing, and eye-popping hysteria while everyone else tries to retain whatever little oxygen is left in the room.

The Devil Within Her is just a jaw-droppingly awful movie.  It's the kind of trainwreck where you really have to wonder if the filmmakers were really trying to be serious, or if this was some sort of put-on.  They couldn't have made The Devil Within Her any funnier if they tried.