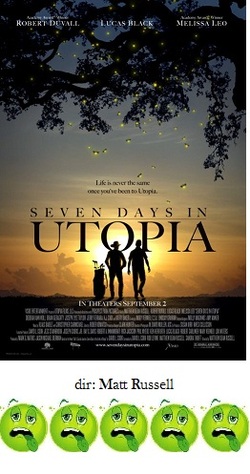 Well the secret is out:  All you need to be close to Jesus is to be able to sink the perfect putt.  Wow, if we only knew....  At least, that's about all I could glean from the dismally saccharine Seven Days in Utopia, a film that has its heart in the right place, but with its sense casually tossed out a window.

Seven Days in Utopia (adapted from David Cook's novel by Cook himself and 3 (?) other screenwriters) stars Lucas Black as a young golfer who's just finished his very first professional tournament; he choked in calamitous fashion and suffered a meltdown in his relationship with his caddy father.  So, Black, in a bitchy snit, gets into his car for a drive to nowhere, and then wrecks after swerving to miss an errant cow in the middle of the road outside of the teensy Texas town of Utopia.

Oh, Utopia.  What a perfect and lily-white place it is.  Everyone is just so darn sweet and nice and in no time Black has a room at the local bed & breakfast, has developed an insta-crush with a young lass and is taken under the wing of former pro-golfer, and resident guru Robert Duvall.

Anyway, Duvall decides to teach Black the ways of Christian golfing as only a Utopian can.  As you may have predicted, Duvall does his version of a redneck Mr. Miyagi by showing Black how to develop his golfing skills by doing such tasks as fly-fishing while balancing on a canoe; but what you may not have guessed is that every single time these two are together, the soundtrack swells with drippy chords while the men bond.  In fact, after about the fifth or sixth time the music engulfs these two while they golf (which includes Duvall giving Black a very weird-looking, homemade putter that must be magic since Black seems to never miss with it), you'll be wanting the name of the composers (Klaus Badelt & Christopher Carmichael) so you can send them hate mail.

Naturally, this visit in Utopia culminates with Duvall instructing Black to symbolically lock his negativity or something in a box and bury it in a tiny cemetery (not too creepy) and then join all the Utopians in a rousing church service in the laughably-named Untited Church of Utopia...since it wouldn't do for the movie to actually proclaim a faith or anything for fear of alienating a portion of what little audience there may have been to see it during its flop theatrical run.

The film ends as it must with Black fixing his car, mending his relationship with his dad and then entering another golf tournament.  Does Black win?  I have no idea, because Seven Days in Utopia ends with one of the most desperate, shameless and insufferable marketing ploys in all of filmdom:  Black needs to sink one last putt, so, he hauls out Duvall's putter, readies it and then....we end with a freeze-frame and an anonymous voice-over that tells us that we have to go to the film's official website in order to find out if he won or not.  Needless to say, I couldn't have cared less.

The real winners, though, have to be anyone who manages to get through every minute of Seven Days in Utopia without passing out from utter boredom or succumbing to a sugar coma.  The best thing I can say about the movie is that it, at least, looks professionally made and it is competently acted, which is something that can't be said for the bulk of faith-based Christian junk like Fireproof, The Judas Project or The Omega Code, but that also limits its razz-worthy entertainment value.

As far as Utopia is concerned, Texas can have it.