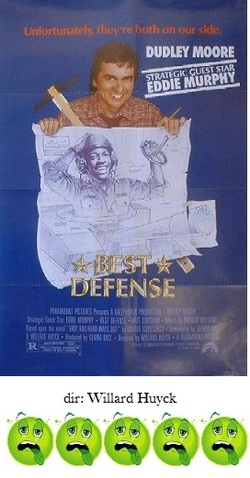 In the opening credits (and poster) for Best Defense, there is a very vivid clue as to why it is widely regarded as one of the biggest ripoffs ever to be foisted on the movie-going public.  What can you derive from "Strategic Guest Star Eddie Murphy?"

Yes, Eddie Murphy is in Best Defense...sorta.  You see, the studio realized they had a complete turkey on their hands, so as a way to try and lure unsuspecting patrons into theaters, they hastily cobbled together some other footage with the newly-hot property that was Eddie Murphy and then spliced it into what they already had.  Both Eddie Murphy and Dudley Moore may be in the movie, but they are never on screen together and their plotlines barely have anything to do with one another.  Oh, and none of it is funny, either.

Moore stars as a burnt-out engineer involved on a big project that involves a global tracking defense system.  He comes across the perfect design schematics on a floppy disk that was accidentally planted in his briefcase by paranoid engineer, Tom Noonan.  David Rasche is also on hand as a bonkers double-agent who wants the plans, too, to sell to Eastern Europe.  Filling out this part of the cast we have Kate Capshaw as Moore's prickly wife, George Dzundza as his best pal and co-worker, and Helen Shaver as a hot-to-trot scientist who finds Moore's "brains" infinitely sexy.  And the bulk of Best Defense deals with the non-comic potential of this situation that could barely sustain a skit on SNL let alone an (nearly) entire movie.  The attempts at humor fall solely on Moore's shoulders, and he has nothing to work with; in fact, with the exception of the grotesque overacting of Rasche, hardly anyone realizes they're supposed to be in a comedy.  Every feeble joke just dies on the screen and nothing Moore could do could possibly save it.  Hence, the shoehorned Eddie Murphy scenes.

So, where does Murphy figure into this?  Well, the Moore scenes are flashbacks of events that happened two years earlier, and Murphy's scenes constitute the present.  Murphy plays an American soldier in Kuwait who is commanding a new-fangled tank in some training exercises.  What does this have to do with anything?  It seems that the gizmo that Moore "developed" for his company has been installed in the tank.  For two-thirds of the film's running time this seemingly important factoid is never clearly explained, so whenever the movie jerks back and forth in time, it's a mystery as to why.  Nevertheless, with Murphy we expect laughs...any laughs.  We don't get any...at all.  Every time Murphy shows up he simply screams.  At the Kuwaiti citizens.  At the other soldiers in the tank with him.  At himself.  Over and over again.  The whole thing reeks of the desperation a talented guy like Murphy exudes when given nothing to do, but who is saddled with the responsibility of trying to single-handedly save an entire movie.

Best Defense is mind-numbing in its idiocy and it's insulting to think they could get away with this shambling wreck of a movie.  Despite Murphy's name in the credits, critics still dismantled Best Defense and audiences wisely stayed away.  For Eddie Murphy, this was a just a minor blip on his rise to superstardom, but for Dudley Moore, it was more like the beginning of the end.