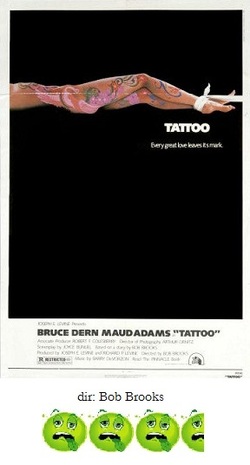 Tattoo is essentially the story of a wacko tattoo artist, played by career Hollywood loony, Bruce Dern. After visiting Japan and becoming enamored of the intricate tattooing, Dern returns home to become a tattoo artist. To him, tattoos are spiritual, thus he calls it "the mark".

Anyway, he is hired by a local fashion rag to paint his designs onto the bodies of some models to promote a new swimsuit line. There, Dern meets up with an internationally famous fashion model, played by Maud Adams. Now, a word about Maud. Like Marguax Hemingway in Lipstick before her, Adams may be gorgeous, but she can't act, but apparantly film studios of the time were under the mistaken impression that supermodels were the next big thing in acting. After this, Adams appeared as the title character in the James Bond flick Octopussy and essentially disappeared into B-movie oblivion.

Dern falls for Adams and they begin to date, even though she's married. At his apartment one evening, Adams tries to put the moves on Dern, who is having none of it, see. "Are you asking me to have intercourse with you?" he asks, right before throwing her out.  Next, of course, come the repeated telephone calls and stalking, until he breaks into her apartment and kidnaps her. Dern steals her away to his late father's seaside home where he makes like The Collector and keeps Adams imprisoned. While she is unconscious, however, he proceeds to tattoo her body. They proceed to play mind games with each other. Dern wants to "make [her] clean" so she is "worthy of the mark" and Adams tries and fails to find things to stab him with.  Adams eventually succumbs to Dern and allows her body to be completely tattooed, scarred for life as it were. Until, finally, Dern believes she is worthy. Then they have sex, until Adams takes the tattoo gun and stabs Dern to death. The end.

Yes, Tattoo is pure hooey. There are so many problems with it, it's hard to know where to start.

Maud Adams, as previously mentioned, is just awful. And, the technical aspect of tattoos and tattooing is mishandled as well. You see, tattoos bleed. Tattoos scab over. Tattoos take a little while to heal. In Tattoo, none of the tattoos bleed, even while they are being done. They all look picture perfect mere seconds after being completed. Also, the script, by Bunuel, is simply poorly contructed. It takes forever to finally get where it's going, and when it finally gets there you wish it would just end.