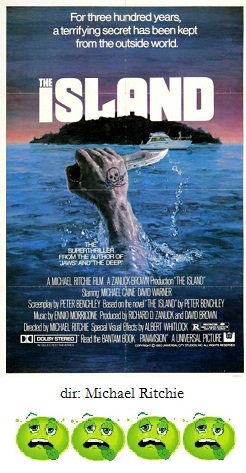 After Jaws became a monstrous success, producers scrambled to adapt anything else by novelist Peter Benchley. It would seem that they would have learned their lesson after the dull The Deep, know less as a quality thriller than for Jacqueline Bissett's nipples showing through a wet T-shirt. Then came The Island which attempts (but fails) to bring the world modern day pirates.

In a certain area in the Atlantic Ocean, over 300 boats have disappeared over a short number of years. This of course, raises no suspicion anywhere except for a magazine reporter, played by Michael Caine. So, of course, he decides to take his son fishing in the same accursed area, stupidly risking their lives for the sake of a hot scoop.

The opening scenes of The Island have a group of grungy buccaneers slaughtering helpless fishers and vacationers, stealing their children, and sinking the boats. When Caine and child are attacked, Caine kills one of them, falls unconscious, and wakes up on the pirate island. Now, here is where things get stupid. After all, it's made pretty clear that they are ruthless and bloodthirsty, but for some reason they let Caine live. If they didn't there wouldn't be a movie. Oh, they really shouldn't have.

The reason for letting Caine live has something to do with the fact that his character's last name is Maynard and it's the name of the person who killed Blackbeard, and therefore constitutes royalty.  The Evil Pirate King, played by superham David Warner, adopts Caine's spoiled brat son as his own, brainwashes him, and gives him a new, and notably idiotic,  name.

Benchley's screenplay doesn't do much to explain how these people survived for so long, or how come nobody ever has discovered them for 300 years, or why they speak in pidgen English as if they just learned it: "Me catch, me make for food!" The helpful information about the group's history of inbreeding has something to do with it, I suppose.  The entire film becomes basically a repetition of exactly two scenes. Caine figures out a way to escape captivity and does so and pirates find Caine and punish him. There is even a pirate woman, or piratess, who is the widow of the man Caine killed and therefore is made his wife. Sex is called "thrusting" and one character speculates that Caine is alive because of his, er, "royal thruster".

Anyway, the finale has the pirates storming a coast guard ship slaughtering everybody, while ill-advised raucous adventure music plays on the soundtrack as if to say: "Hey kids! Doesn't slicing throats seem like fun!". Caine escapes, finds a machine gun and blows them all away, somehow avoiding shooting his boy. Oh well, it wouldn't have been that great a loss anyway.

Single funniest moment: While storming a ship of vacationers, the pirates kill everyone except for one guy. This guy fights back by, yes, making hilarious karate noises ("wooooha heeeeya") and basically pulling a Bruce Lee. Thankfully this guy is run through with a sword before he could embarass himself anymore.

In the patchy repertoire of Michael Caine movies, The Island is a pretty lame, but inconsequential, blip. But it sure beats Jaws: The Revenge.