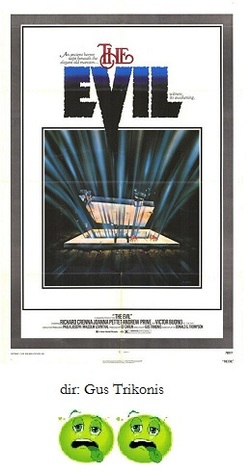 Oh I was such a stupid child, because way back when I first saw this flick, I actually thought it was good. Now don't get me wrong, "The Evil" does have its good points, but what I took as interesting and creepy then, comes across now as belabored and corny.

The Evil stars Richard Crenna as a professor of psychology who rents this giant abandoned house on a hill to renovate as a sort-of refuge for drug abusers, I think. Anyway, despite the stories of strange goings-on and the house's history of being built on desecrated land, he and a team of fellow colleagues and students go to the manse and begin fixing it up. As far as set-ups go, you could do a whole lot worse.

But Crenna does a really really really stupid thing. He finds an old door in the floor of the basement that has been closed and buried under a layer of dirt with an ancient cross placed in the door-handles to keep it closed. Of course he pulls the cross out, which opens the door and unleashes.....gasp.....the EEEEEVIL.  Naturally, he doesn't realize this at the time but he has opened up a pit that goes, literally, straight to hell..

So now the flick turns into a haunted house slash fest. Despite the fact that someone is burned alive from a broken furnace, that a dog goes beserk and tears out his owner's throat, that doors and windows close and lock by themselves, that someone else is mysteriously electrocuted, Crenna still says stupid things like "There's got to be a rational explanation for it".

Even after the house rumbles like there's an earthquake, or a fellow professor attempts to buzz-saw off his own hand, or a student is attacked and her clothes are torn off by an unseen force, Crenna still doesn't want to face reality.

Anyway, now that everyone else is dead except for Crenna and his lady-friend, they figure out that they need to close the doorway to evil and put the cross back where it was. But they drop the cross down into the hell-pit and must go down and search for it. With badly superimposed smoke, Crenna stumbles around and finally makes his way into a white room where he finds a fat guy sitting on a throne. Yes, I kid you not.  This guy, of course, is the devil, or a demon or whatever, played by Victor Buono (a very far cry from his Oscar nominated work in Whatever Happened to Baby Jane?). Well, Buono and Crenna talk about evil and such for awhile until our heroine suddenly appears and stabs Buono in the chest with the cross. The house's doors fly open and our two friends live to see another day.

There is some good atmosphere in The Evil and some pretty decent shocks for it's day (I know, things have changed in 20+ years). But the complete stupidity of the Crenna character is just an exercise in frustration; he's that kind of skeptic who, no matter what, won't except things as they are. It takes him to be possessed by a demon in one scene to finally go "Ok, something weird's going on."

It's possible to sit through The Evil without rolling your eyes tooooooo much, but remember to check your brain and your patience at the door.