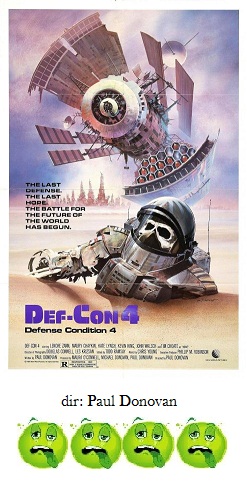 Def-Con 4 starts off so promisingly, that when it gets submerged into cliched mediocrity, it's all the more disappointing.  There was a good idea here, initially.

The movie begins in an orbiting, missle-defense space station where three astronauts have been cooling their heels for nearly a year, waiting for the tour of duty to end.  We have the captain, John Walsch, the physician, Kate Lynch, and the squirrely lieutenant, Tim Choate.  Anyway, just as the trio are planning on making their way back home, nuclear war breaks out on Earth below them.  They shoot off their own missles (save for one), but it's too late.  The Earth is toast.

These opening scenes are well-staged and acted and it's quite a success that the director, Paul Donovan (with uncredited assist from Tony Randel), is able to sustain a terrific level of panic and dread as we experience the same feelings as our three characters.  Good stuff.  Sadly, the good moments within Def-Con 4 pretty much end right here.

Anyway, less than two months later, their station's computer is inexplicably hijacked and they are sent back down to Earth against their will.  Once they land, Walsch exits the craft and is immediately preyed upon by the roving cannibals and gets carved up into steaks.  Now, I would like to think that it would take quite a big longer than 50 or 60 days for everything to devolve so completely into cannibal gangs riding in Mad Max-style vehicles that roam the countryside for people to eat.  Call me an idealist.  Well, Choate, Lynch and a couple of grimy citizens played by Maury Chaykin and Lenore Zann are captured by a band of military nuts who've seized power over hundreds of folks and have kept them all ensconced and enslaved in some sort of man-made village.  Again....two months?

And then we come to the biggest misstep in all of Def-Con 4: that would be the casting of Kevin King as the defacto leader of this entire society.  You see, King is actually a pretty, blow-dried, boarding school brat, so it's kind of hard to understand how he would have the brains, charisma or power to be able to take control of the military men and the townsfolk; he is about as intimidating as a particularly ornery guinea pig.

The bulk of the movie is just this back and forth power-struggle between our heroes and King and his guys, and there are endless scenes of people getting gunned down or chopped up all the while dirt, grime, vomit and mud is flung around without cease.  Choate and Zann are the only ones who survive the mayhem and then King and the rest of the baddies are blowed up real good by that stray, errant nuclear missle they kinda didn't notice they dragged into their town.

It's a shame that Def-Con 4 couldn't come up with anything better than what's on display here.  Once the spacecraft lands, all effort to provide some sort of believability is thrown out the window.  It winds up just being kinda grim, exploitive nonsense that has been deservedly forgotten in the quarter-century since its initial release.