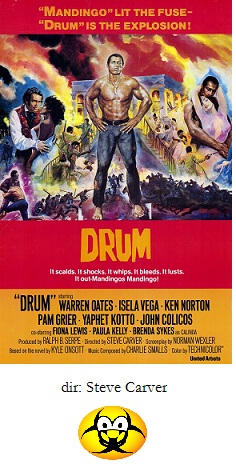 Egad! The tagline for this movie reads "MANDIGO lit the fuse...DRUM is the explosion!", and as anyone familiar enough with the trash classic Mandingo knows, that particular boast will be tough to back up. But back it up Drum does. However tacky, offensive, and utterly jaw-droppingly hilarious Mandingo is, "Drum" is so much worse. How could it happen?

Although Drum is usually misstated as an actual sequel to Mandingo, the only similarities are that they are both based on tawdry novels by Kyle Onstott and they both star talent-free bohunk Ken Norton.

Drum begins with a narrator explaining what slavery was: yes, the film assumes the audience knows next to nothing about it, and then proceeds to recite the story of a daughter of a Louisiana plantation owner, named Marianna, who gets preggers by a hot slave buck. To save herself from ruin, her slave wench, Rachel, who is also Marianna's lesbian lover, claims the baby as her own. The father is executed, the baby is born, and Marianna and Rachel take off to New Orleans where Marianna becomes a respected whorehouse madam. Yes, this all happens in the film's first five minutes.

Years later, the child, named Drum and played by Norton, works as a servant in the whorehouse. He is immediately eyed with lust by two male French aristocrats. The most evil and foppish of the two, DeMarigny, blackmails Marianna into making Drum fight his own personal slave, Blaise (played by Yaphet Kotto who really ought to be ashamed). After Drum beats up Blaise, DeMarigny gives Blaise away to Marianna and offers to provide Drum with his own woman; of course, a parade of slave women are paraded out and have their breasts fondled for the camera until Drum decides on one. But, no sooner has Drum started to get naked with the babe in his room then DeMarigny intrudes and wants to watch the proceedings; then he rubs up against Drum, stroking his chest and cooing about another part of the bargain, if you catch my drift.

Anyway, he punches out DeMarigny, who then returns with a slave knife-fighter to kill Drum. That doesn't work, so he attempts to shoot Drum, only to have a stray bullet kill Rachel. Ken Norton's performance can be most kindly called "wooden", but watching him try to emote at the death of his "mother" is truly a sight to behold.

Drum then devolves into an even nuttier rehash of Mandingo. Drum and Blaise are sold to Hammond, plantation owner and sometime lover of Marianna, there is also, yet again, a jealous new fiance, Augusta, and a new bed-wench for Hammond that Drum falls in love with and Augusta torments. The new bed-wench, Regine, is played by none other than Pam Grier (here credited as "Pamela Grier"), who probably thought this was a step-up, career-wise.

There is lots more carrying on, what with Hammond bedding Regine, Drum bedding Regine, Hammond's randy young daughter Sophie attempting to bed any slave man in sight. After Sophie tells a lie to Hammond that Blaise raped her, Hammond decides the best thing to do is castrate the offender. There is a lovely scene where Hammond and Augusta throw a large dinner party to celebrate their engagement (both DeMarigny and Marianna are guests of course), and during dinner they all discuss the best way to castrate a slave. In turn, Drum and the slaves can't stop talking about being "de-nutted".

Well, the slaves have had enough. There is a violent uprising at the engagement party with lots of fire and bloody gunplay. Everyone is pretty much dead except for Hammond, Augusta, Sophie and Drum, (Drum earlier dispatched of DeMarigny by grabbing him in the crotch, twisting, and ripping the whole package off). As gratitude for saving his family, Hammond awards Drum his freedom, sending him running into the night. The end.

Drum is just a hilarious catastrophe from the start. Unlike Mandingo which had big name stars (James Mason, Perry King, Susan George) to give the proceedings an air of class, Drum has nothing to offer by way of talent, in front of or behind the camera. It is just a parade of hilarious scenes punctuated with giggle-inducing dialogue. This movie is just a sea of slave-seducing, brawling, whippings, spankings, knifings, boobs, rapes etc. etc. etc.

There is more high comedy in Drum than 20 so-called comedies churned out by major studios. Unfortunately, with this film's obvious attempt at wanting to be taken seriously, that isn't exactly a recommendation of quality.