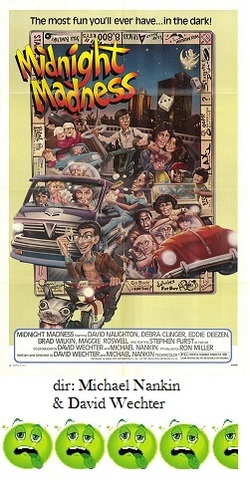 In 1963, a big hit comedy called It's a Mad, Mad, Mad, Mad World was released to great reviews and box office.  It was an epic all-star cross-country comedy surrounding a hunt for some hidden treasure that was frantic and very funny.  Periodically, Hollywood has tried to replicate its success, but the results have usually been pretty dire.  We got Scavenger Hunt (1979), Million Dollar Mystery (1987) and Rat Race (2001), to name a few; but the worst of them all has to be the dead on arrival Midnight Madness.

The plot of Midnight Madness surrounds a scavenger hunt-type game called 'The Great Allnighter' which pits teams of college kids against one another as they follow a trail of clues that will lead them to....nothing.  At least the other movies provided their racers with a huge cash prize as a goal.  The only thing the racers in Midnight Madness get is, well, the right to say "we won," I guess.  Not that that should really matter as long as the movie were actually funny and entertaining.  But it's not.  At all.

The characters here don't have one fully functioning personality or brain cell, collectively.  The teams are only distinguished by the color of their sweatshirts: the Yellow Team, which includes John Naughton (An American Werewolf in London) and Michael J. Fox (in his film debut), is supposed to be group of heroes that we root for, and then there is the villainous Blue Team.  The slate is filled with the White Team (nerds) , the Green Team (jocks) and the Red Team (weird sorority chicks).  So, for the length of the movie, these teams all run around in a frenzy, trying to solve absurdly moronic clues and thwarting each other with the most juvenile of physical humor.

I would love to say it was all stupid fun, but it was just plain stupid....and very, very forgettable.  About the only thing that'll stick with you is the sight of two of the sorority girls, a couple of obese twins who never say anything except for an annoying giggle, trying to keep their big butts balanced while they ride on a pair of scooters.  I said it was memorable; I didn't say that you would want to remember it.  And because Midnight Madness just can't get enough of fat jokes, Stephen Furst (Flounder from National Lampoon's Animal House) is on hand to show us how uproarious it is to have a fat guy always shoving fist-fulls of food into his face at every given opportunity.

Who wins?  Who cares?  Just be thankful when it ends.  Any aspiring young directors should study Midnight Madness pretty closely as a case of what not to do when your big break in movies arrives.  The co-writers and directors here, Michael Nankin and David Wechter, directed a couple of very well-received short films and through that success they scored a directing contract with Walt Disney.  Midnight Madness was their film debut and it was such a dismal critical and commercial flop, their feature film careers pretty much ended right there.  Wechter managed to make one other film, The Malibu Bikini Shop (1986), and he and Nankin have spent the rest of their careers in television, with varying degrees of success.

Surprisingly, Midnight Madness has started to develop a bit of a cult following and, to be fair, it is a fairly harmless movie.  Young (reeeeeeeeeeally young) children might get a kick out of it, but for everyone else, there just isn't any need to be subjected to what is the cinematic equivalent of a stale rice cake.