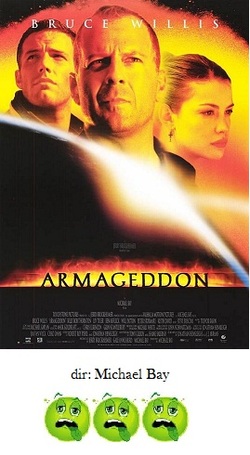 The whole plot of Armageddon is based on an idea that is so completely flawed, illogical and ridiculous that it pretty much fails just as it begins.  But since this is a Michael Bay movie, your senses are going to be hammered into submission, regardless.

So what is the plot?  Well, there's this giant meteor and it's heading straight towards Earth.  So how is mankind's demise going to be prevented?  You see, NASA is going to recruit this dysfunctional group of off-shore oil drillers, train them to be astronauts so that they can land on the meteor, drill some deep holes, plant some nukes and blow it to smithereens.

Why is this plan so stupid?  Don't you think it would be more logical and feasible, not to mention simpler,  to train a bunch of astronauts on how to drill some holes than it would be to train some drillers to be astronauts?  Somehow I think the learning curve on mastering astrophysics would be somewhat steeper than manning a drill.

But Armageddon has other problems aside from this.  Our hero drillers are a bunch of lunkheads led by Bruce Willis and Ben Affleck, and in order to pad the film's running time, an inordinate amount of time is devoted to Affleck's romance with Willis's daughter Liv Tyler.  As if anyone cared.  So the first half of the movie is devoted to the training of the drillers with brief interruptions to watch Affleck and Tyler moon over each other while Willis gets steamed.

Finally, the guys go up to the meteor and Bay kicks everything up to 11.  For a numbing eternity we get explosions, a whooshing space shuttle, flying rocks, collapsing craters, and flying space rovers while the cast screams and leaps around obviously phony looking foam rubber sets.  The camera spins around in circles, the editing nearly induces epileptic fits and the soundtrack thunderously crunches the eardrums causing blinding migraines.  When the end credits finally roll (and after our heroes sacrifice their lives by blowing themselves up on the meteor in scenes that don't jerk tears so much as liposuction them out) you might need to check your body for bruises.

Of course, many find Armageddon to be great entertainment.  But if you're looking for a believable story, a well-written script, good performances, genuine emotion and coherent direction, you won't find it here.  You can, however, find these things in Deep Impact, a similar film that was released in theatres several months before Armageddon.  But because Armageddon was a huge box-office hit, we've been assaulted by other Michael Bay monstrosities like Pearl Harbor and the Transformers series.  Hey, you get the movies you deserve.