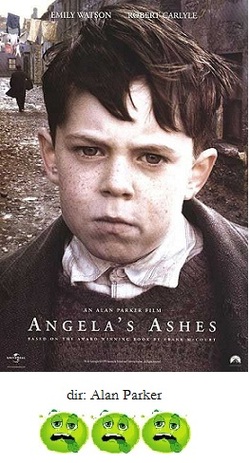 Among the most eagerly anticipated and most thunderously disappointing literary adaptations of a best-seller was is the film version of Frank McCourt's celebrated autobiographical book, Angela's Ashes.

Everyone, by now, should be familiar with this story of Frank McCourt's impoverished and tragic childhood in Ireland. It was a heart-wrenching, but eventually uplifting read and deserved all of the acclaim it received. The movie, however, completely fails to generate any emotional resonance. The audience feels some pity for the characters going through their lives of deadly childhood diseases, torrential rain, starvation and misery, but little else.

As the story begins, the McCourts are a very poor Irish Catholic family living in New York City. After the death of their infant daughter, the patriarch of the clan, played by Robert Carlyle, does one of his usual drunken disappearing acts, and his wife Angela, played by the always winning Emily Watson, falls into a deep depression. Some neighbors arrive to find she and the rest of the children living in total and complete filth and squalor. After Carlyle's return, they decide to head back to Ireland and try to start over again.

Unfortunately, this opening sets up what is in store for the viewer for the rest of the tough two and a half hours of the film. A miserable cycle whereupon another McCourt child perishes tragically, the father gets plastered, spending away what little cash the family has, and headstrong Angela trying to help the rest of the family survive. Needless to say, it gets old real fast.

The movie keeps the viewer at a frustrating distance from the material. It's an overload of grime, mud, drizzle and decay and no emotional involvement. It's just thrust on the screen in great big miserable gobs, but it's unable to capture any heart or even provide any reason for why we should want to watch it. Since the screenplay does little to allow us into the thought processes of the characters, it is hard to understand how a woman such as Angela just doesn't leave the good-for-nothing husband of hers and try to maintain some sort of dignity. Yes, there are some almost cliched references to the Catholic stance on such matters, but when your family is sitting down to Christmas dinner of a boiled sheep's head, you may need to rethink your priorities.

Another tragic misstep is the portrayal of Angela herself. Watson's performance is good as usual, but the screenplay makes her character completely one-dimensional and unfocused. Instead of coming across as the titular object of inspiration and reverie, she's more of just a sad slip of a woman and not very bright to boot. I don't know how many times she says to Carlyle, "But we have nothing to eat!!", but it was a lot. Eventually, she is even reduced to digging through the church garbage for scraps and turning tricks just to keep a roof over her and her kids' heads.

Yes, Angela's Ashes is one tough slog.  It's a film that is more of an endurance test than a rewarding experience. Essentially there is no need for anyone really to subject themselves to this, except only if it is to prove that, yes, they could do it.
Director Alan Parker tries his best with the material, but can't really get a handle on the big question: "Why would an audience intentionally want to sit through this?"

If close-ups of dead babies and people wallowing in their own urine and excrement is your idea of a good time, by all means see Angela's Ashes and you will get your wish. For the others that want an amazing tale of family strength and inspiration in the face of great tragedy, read the book.