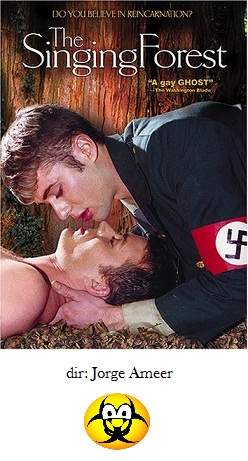 I hardly even know where to begin in describing what the experience of watching the horrific-beyond-words The Singing Forest was like.  I was completely dumbfounded.  This has to be the silliest, most offensive, most totally incompetent movie ever to get a (very limited, anyway) theatrical release.

How's this for a plotline?  Jon Sherrin is a middle-aged widower who travels to the big city for the wedding of his daughter, Erin Leigh Price, and while there he'll stay in the apartment of Price and fiancee Eric Morris.  The conflict arises due to the fact that a psychic tells Sherrin that he is the reincarnation of an executed WWII anti-Nazi resistance fighter and that Morris, his soon to be son-in-law, is the reincarnation of the resistance fighter's gay Nazi lover.  So now Sherrin must convince Price and Morris about this fact all the while making the moves to get Morris into the sack.

Another bizarre plot twist occurs when Sherrin reveals to Price that she was conceived when he raped her mother.  The screenplay is so totally misbegotten that, even when Price learns this fact (not to mention that her dad is trying to make it with her soon-to-be husband because of this reincarnation business), she pretty much just shrugs it all off.  Oh well, no biggie.

In a twisted way, The Singing Forest sounds like it could have the makings of a great bad movie.  Unfortunately, writer/director Jorge Ameer takes this story deadly seriously.  This is compounded by the fact that he can't write, he can't direct and the three performers can't act.  The whole movie gets off to an offensive and queasy start by showing pictures of concentration camp victims and Nazi atrocities edited together with the two lovers.

I know I've called other movies imcompetent before, but The Singing Forest redefines that term.  How?  Glad you asked...  First, the whole movie looks as if it were filmed with Ameer's cellular phone.  Every scene has a flat, ugly, washed out look, and when we get flashbacks of our WWII lovers, everything is filmed at night, in such total darkness, it's impossible to tell what's going on...also it looks as if it all may have been filmed in the woods behind Ameer's house, anyway.  Even more problematic is the sound mixing which illicits the movie's biggest laughs.  In one very long and talky scene on the beach between Sherrin and Morris, all of the dialogue is completely drowned out by the crashing ocean waves behind them.  And during another scene between our three leads while they eat dinner, a dog (from a next door apartment, I assume) barks incessantly; and yet, I imagine Ameer told his actors to just ignore it.

The Singing Forest is such a failure in every capacity that it's almost worthwhile to seek it out.  After all, you will never see anything like this ever again.  God, at least I hope so.  Ameer has continued to make movies since this...therefore, I may have spoken too soon.