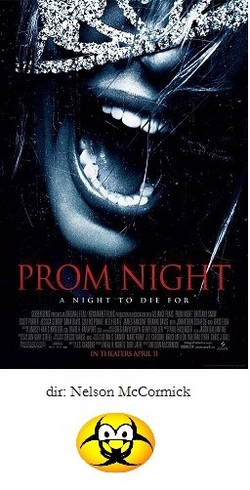 Although it's considered yet another  one of those recent up to date remakes of 80s era slasher film, the biggest mistake here is that, except for the title and the fact that it takes place at a high school prom, the two films have absolutely nothing in common.

That would all be well and good if this new version actually did something new and original with the concept, but it's apparent that screenwriter J.S. Cardone coughed out this script while sitting on the toilet one morning and called it a day.  The plot here involves blonde, bubblehead Brittany Snow who is stalked by an infatuated teacher who tracks her down at the hotel where the prom is being held, and then proceeds to slice his way through the untalented cast.

I kid you not,  when I say that the entire film is comprised of exactly one scene repeated ad nauseum: a dumb teen goes up alone to the room they've rented, walks around it, opens a closet door, and is then dispatched by the killer; another dumb teen says "Hey, where did (fill in the blank) go?" "Up to the room" and up goes the next dumb teen alone to the room and so on, over and over and over again.  So much nothing happens that Prom Night can barely even qualify as a movie.

Needless to say, nothing about this 2008 travesty can come close to matching the 1980 original with scream queen Jamie Lee Curtis.  Let's just say that Curtis has more talent and charisma in her bellybutton lint than Brittany Snow has in her entire soul and being.  The vacuous march of faceless and talentless teens to the slaughter has never been more tedious as it is here.  It's completely bewildering that Screen Gems thought they had a releaseable film here; sure, the production values are slick and some money went into making it look professional, but it's still totally amateur night.

Babysitters take note, if those unruly brats won't go to bed, simply pop Prom Night  into the DVD player and they'll be unconscious in record time.