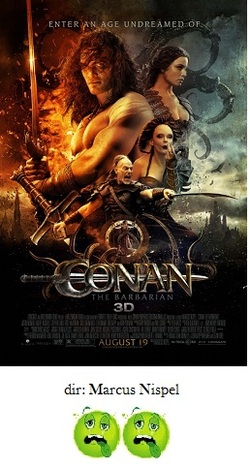 This retread of Conan the Barbarian is exquisite looking and has many bravura action setpieces, but ultimately fails due to a couple of very basic problems: the cast and the script.

There is no doubt that director Marcus Nispel is a very talented guy.  With Conan the Barbarian, Nispel can be declared the go-to guy when it comes to remakes, this being his fourth in a row after The Texas Chainsaw Massacre, Pathfinder, and Friday the 13th.  But for whatever reason, this time he hamstrings himself with a thoroughly uninteresting and lazy script and a leading man that is just so much dead weight.

The original Conan from 1982 was the breakthrough role for Arnold Schwarzenegger who, at the time, was nobody's idea of a great actor,  but what Arnold did have was a great screen presence.  Regardless of his stilted line-readings, he had so much charisma that it didn't matter.  Our Conan this time is Jason Momoa, and in a word, he's dreadful.  Momoa's performance is just so much smirking and winking without any sense of gravitas.  He comes off as some lame Chippendale's dancer in a loincloth.  Pretty, yes.  Talented, no.

An even bigger issue is the flat script which cobbles together every single dull sword and sorcery cliche you could possibly imagine.  Conan must avenge the death of his father by defeating Stephen Lang, a one-dimensional, evil warlord who is trying to bring all of the pieces of a sacred mask together and rule the world.  One question that arises is the fact that, in the pre-credit narration, we are told about the pieces of this mask, but Lang actually gets all of the pieces fairly early on.  So why the lag in power?  Oh yeah, they have to find 'pure blood' from...I don't know....a virgin or something?  It's very vague.  Bland Rachel Nichols is this virgin (or at least, she's a virgin until hopping in the sack with Conan), and if we were Conan we'd just let Lang have her.  The entire plot is just a loosely connected string of action moments with swordfights ad nauseum against everything from evil warriors to dirt spirits to a giant kraken-like creature.  It gets real old real fast.

Another problem is the fact that at several points throughout Conan the Barbarian, characters have opportunities to kill Conan, but they never do.  They'll have him at a vulnerable position and then someone will intone "In due time!" or "Not yet!"  Rose McGowan makes an appearance as Lang's sorceress daughter (her character and performance is, by far, the most interesting), and at one point she laces a dagger with a potion, of which she cuts Conan, that causes him to become weak and confused during a swordfight with Lang.  Why didn't she just lace the dagger with poison or a death elixir?  Because the plot wouldn't allow it.

Overall, the only thing Conan the Barbarian has to offer is some great cinematography and some above average action moments (the finale is quite inventive and entertaining).  It's meant to be mindless fun and, for the most part, it is.  If you go in expecting anything more, you'll surely be very disappointed.