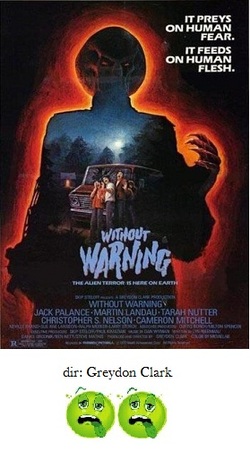 In Without Warning, there is this alien.  What it is, where it came from and why it's here on Earth, are just a few of the many unanswered questions you'll be asking yourself while watching this odd, goofy, but not totally unentertaining, piece of otherworldly horror.

In the film's earlier scenes we see a couple of hunters run afoul of the alien.  Or should I say, we see them run afoul of something that flies through the air, attaches to their bodies, and begins gnawing on their flesh.  These carnivorous disks somewhat resemble pancakes or mini-pizzas with teeth, and they hurtle through the air with a loud whooshing noise (which is the first indication that the film's title is somewhat of a misnomer).  Anyway, afterwards a cub scout troop is getting ready to set up camp in the same area, and even though I was secretly cheering for the mini-pizzas to take out a whole passel of cub scouts, they only manage eat the scout master.  We next follow a teenaged foursome (including a young David Caruso) who've unwisely decided to head down to the nearby lake for the afternoon, and in no time, Caruso and his girlfriend are reduced to so much alien chow, leaving the other couple, Tarah Nutter and Christopher S. Nelson, to try and seek help and safety.  It's at this point Without Warning goes in a pretty bizarre direction.

Nutter and Nelson wind up in this redneck roadhouse where they encounter superhams Jack Palance and Martin Laudau.  Palance is a creepy gas station owner with a secret personal agenda in regards to the alien and Landau is a nutball former military guy who apparently has been going off about the aliens for such a long time he is basically ignored as the crazy man that he is.  Again...wasn't this a warning, too?  For the next big chunk of screentime, Without Warning turns into this strange comedy of errors where Nutter and Nelson are chased and basically kidnapped by Palance, then by Landau, and then by Palance again.  Palance forces them to take him to the shack where all of the dead bodies are so he can blow up the alien, and Landau has convinced himself that they are actually the aliens themselves, so he wants them to tell him what the alien masterplan to take over the Earth is supposed to be, all the while they dodge the mini-pizzas which seem to just appear out of nowhere.  Both Landau and Palance crank up the scenery-chewing dial to such extremes that they basically turn what would ordinarily be a routine film into one with a cockeyed sense of humor.

The mini-pizzas are all well and good, but what about the main alien itself?  It's a disappointment.  When we finally get to see it, it's your basic, generic, big-headed, two-legged alien, except for the strange outfit it wears and the fact that it has to hurl the mini-pizzas like frisbees (but not very accurately or quickly as is shown).

Without Warning isn't a good movie, but considering the description above, there is some surprising entertainment value to be had...or at least it's had once Palance and Landau enter the picture.  For a cheapo alien movie, it's amost kind of endearing.