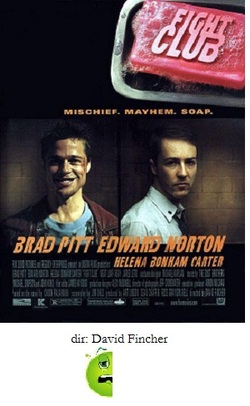 Such a shame. The first three-quarters of Fight Club has some of the most brilliant, visceral filmmaking ever. It is powerfully acted, expertly directed and thought-provoking.  But then a curious and unfortunate thing happens, just as the film gears up for the final act, it almost totally disintegrates right in front of your eyes. How did it happen? I'm still not entirely sure.

Fight Club is basically the story of a lonely yuppie, played by Edward Norton. He has a great job and material wealth, but he is wracked by insomnia. This insomnia is caused, he believes, by having no belief structure to fill his persistent emptiness. He begins to tap into other people's miseries by joining several self-help groups, like Testicular Cancer Survivors and Living With Blood Parasites, and vicariously feeling the people's emotions. He is now able to sleep.

At this stage two people enter his life. Helena Bonham-Carter is a strange, dark woman who is also a "misery junkie" and shows up at several of the seminars that Norton is attending, and Brad Pitt is a soap salesman he meets on a plane and who shares his basic outlook on existence. After an accident occurs, where his apartment is blown up, Norton moves in with Pitt in a decrepit house in the middle of nowhere and Bonham-Carter hangs around as sort of a groupie, becoming emotionally involved with both.

Norton and Pitt, at this time, discover male-bonding through fist-fights. Sounds odd I know, but the film depicts it as a quite plausible solution to so-called "male rage". They gather a large group of men into the basement of a local bar and organize the Fight Club, where guys who are disenchanted with their lives, who feel abandoned by their fathers, or oppressed because of their gender, conduct organized fights with each other. So we get several scenes of men beating each other to a pulp. It is harrowing to watch, but fascinating too.

It is at this point in the film where everything falls completely apart. For no reason whatsoever, Norton and Pitt, bring several of the men to their home and conduct some sort of bootcamp. The men are recruited, abused and shorn. They are then given identical black t-shirts to wear and suddenly turn into some sort of post-modern gestapo. Why? I have no idea. I can't figure out where the link between male-bonding and urban terrorism is. I guess it has something to do with the gang mentality or it could be an allegory for nazism. But as depicted in the film, it straddles the border between merely preposterous to downright silly. Watching the guys break into different local businesses to loot and destroy, while bellowing pretentious slogans, is wince inducing.  The rest of the film contains endless scenes of destruction and senseless violence toward innocents, as the group grows bigger and spawns identical clans all across the country. Scenes where Norton runs into Fight Club members in what seems like every major metropolitan city in the country are ludicrous. I'm serious, EVERYWHERE he goes he is greeted by men who give him the Fight Club/brotherhood terrorist secret sign. It all makes Invasion of the Body Snatchers seem subtle.

And then the movie ends with a "trick" ending that has to be seen to be believed. Director David Fincher (Seven, The Social Network) stages a clue to this ending early on in the film that is so blatantly obvious that I'm stunned to find people who were really surprised by it. I won't spoil it for those who haven't seen it, but suffice it to say, when it is revealed, the sheer ridiculousness of it is too much to overcome. It is far-fetched at best, and an insult to the audience at worst. It may all have worked on the printed page within the Chuck Palahniuk's novel, but it does not translate very well to on film.

There is so much to admire about Fight Club that I feel almost guilty for my complaints. But during the latter stages, the film collapses under the weight of its own pretensions.  Call it a most brilliant misfire.