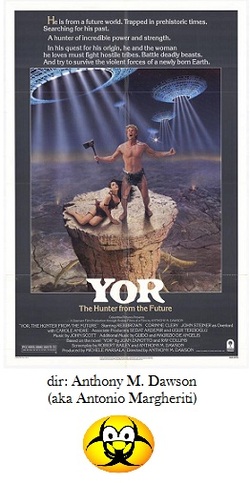 When the caveman epic Quest For Fire was released in 1982, its dedication to realism pretty much closed the door on such silly twaddle as One Million Years, B.C., you know, the 1966 turkey which featured Raquel Welch in a fur bikini.  There were other attempts, from the goofy Clan of the Cave Bear in 1986 all the way up to the lousy 10,000 B.C. in 2008, all of which failed miserably.  One of the oddest, and perhaps the worst, was the strange caveman/sci-fi hybrid Yor, the Hunter From the Future.

Our hero in Yor, the Hunter From the Future is, of course, Yor, played by 80s mainstay Reb Brown, as a seemingly prehistoric hunter who wanders the mountains wearing nothing but a fur loincloth and a gold medallion, wielding a mean stone axe.  After the truly hideous title song over the opening credits (“Yor’s Theme” by John Scott), our hero stumbles upon a tribe of friendly cave people being persecuted by a group of Neanderthals.  We assume they are Neanderthals because of their abundance of facial hair and severe foreheads; the nice cave people at least look like they’ve taken a bath. Brown helps two of these nice ones, beautiful Corinne Clery and old codger Alan Collins (aka Luciano Pigozzi), kill a triceratops after which Brown invites them to “help me cut the choice meats!”

Anyway, after saving Clery’s group, she and Collins join Brown on his quest to discover his forgotten origins, but luckily for him, someone recognizes his medallion as being similar to one worn by a woman out in the desert.  This woman, played by Carole Andre,  lives in the ‘Land of the Diseased’ and is blonde like Brown and comes to the groundbreaking conclusion they are from the same tribe.  But Brown doesn’t really care, all he wants to do is get into Andre’s panty-pelt much to the consternation of Clery.  After they have a brief catfight, the Neanderthals from earlier in the film show up again (they appear throughout Yor every 5-10 minutes as an excuse for Brown to get his axe on) and kill Andre.  Next, our happy threesome comes across yet another tribe, this one by the sea, who shows them a weird mechanical device that fell from the sky. What could it be?

Well, it belongs to a group on a hidden island which is run by an evil John Steiner along with his robots that look like Darth Vader on diet pills.  There are blondes here as well, but they are running a resistance movement against Steiner and company.  Finally, we find out what the hell is going on.  You see, we aren’t in the past, but the post-apocalyptic future!  I guess that this plot twist was supposed to be a big, shocking surprise, but since the film’s very title and poster art kind of spoiled everything it functions more as the inevitable conclusion for which we wait and wait and wait.

I wish I could say that Yor, the Hunter From the Future is a fun bad movie, but that would be a lie. Nothing about this Italian/Turkish production works, even by comparing it to similar films from the era, such as the truly entertainingly bad The Beastmaster.  All of the acting is wooden and all of the dialogue is delivered in the tragic, phony dubbed style that feels disjointed from the actors, even from those that could supposedly speak English.  The effects are lame (check out the baby triceratops that is actually a piglet with a papier-mâché lizard’s tail) and the makeup is wildly inappropriate (Clery is the most beautiful of all the cave women probably because she gets all of the hair conditioner and eye-liner and never misses the chance for a home perm).

Yor, the Hunter From the Future is pure junk-food cinema.  It does nothing to stir the emotions or stimulate the intellect.  It even fails as brainless entertainment. It only got the brainless part right.