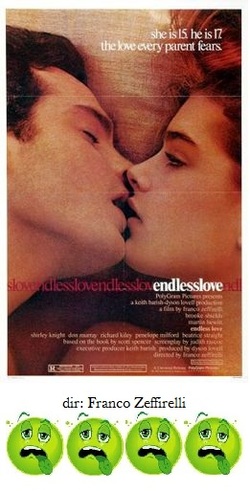 Since director Franco Zeffirelli brought the world his swoonily romantic version of Romeo and Juliet, an adaptation that's almost certainly never going to be topped, it seemed purely logical that he would be the right man to adapt Scott Spencer's torrid novel, also a tragic teen love story, to the big screen.  Whatever magic Zeffirelli brought to Romeo and Juliet is completely missing from Endless Love.

To be fair, I don't think any director could have made Endless Love work simply because of the disastrous decision to have the leads cast with Brooke Shields and Martin Hewitt.  With Shields, we expect a lame performance, and we get (another) one, but scene for scene, Hewitt is her equal in the talent-free sweepstakes.

Endless Love tells the story of how madly in love 15 year-old Shields is with 17 year-old Hewitt, and luckily for them she lives in a rather hippy-dippy household where the fact that Hewitt spends the night with Shields hardly ruffles the feathers of her mother, Shirley Knight.  We even get a nice scene where Knight goes downstairs and spies the two of them having sex in front of the fireplace.  Dad Don Murray on the other hand finally puts his foot down after seeing Hewitt naked in his daughter's bedroom, and forbids the two of them from seeing one another.  Of course this leads to Hewitt losing his mind and accidentally-on purpose setting fire to Shields's house.  See?  He's just that passionate!

Next, Hewitt is put into a mental institution for two years and, naturally, tries to reconnect with Shields after he is released but, unluckily for him, he is spotted by Murray, who then chases him down before getting run down and killed by a taxi.  Hewitt gets blamed for Murray's death and we are all on pins and needles about whether or not Hewitt and Shields will or won't rekindle their romance until the movie ends with an ambiguous freeze-frame that answers nothing.

As stated above, Endless Love's biggest problems are Shields and Hewitt.  They're supposed to be all passionately in love and overcome by furious bouts of ecstasy, but in their love scenes together, Shields might as well be kissing a mannequin for all the lack of energy she brings to them.  Not for one second do we believe these two would go to such extremes for one another; in fact, Shields seems hardly fazed or heartsick at all.  Shields totally underplays her role, which coincides nicely with Hewitt's overacting to the rafters, full of shaking and trembling and teeth-gnashing.  The rest of the cast, also including Beatrice Straight, Penelope Milford and Richard Kiley, are serviceable but the only real interest is viewing a very young James Spader, as Shields's brother, and, in a very brief cameo, a very young Tom Cruise as one of Hewitt's classmates who gives him the idea for starting the fire.

I just wish Endless Love were bad to the degree that it were laughably entertaining, a fun-bad movie, but no, Zeffirelli means for us to take this all very, very seriously.  In the end, Endless Love is just endlessly dull.