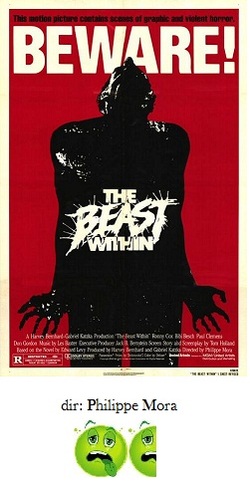 Cicadas figure prominently throughout The Beast Within.  In fact, this detail is hammered upon again and again and again, but by the time the end credits roll, what cicadas really have to do with anything is anybody's guess.

The Beast Within begins with just-marrieds Ronny Cox and Bibi Besch getting their car stuck in the desolate woodlands of Mississippi, and while Cox leaves to get a tow truck, Besch is attacked and, in an unnecessarily graphic scene, brutally raped by some slimy creature.

Jump ahead 17 years later (cicadas, remember?), the product of that woman/beast union, Paul Clemens, a seemingly normal-looking adolescent, is in the hospital with some unknown illness.  Cox and Besch decide to figure out who (or what) is Clemens biological daddy in order to figure out what his disease could be.   For the remainder of the movie, Cox and Besch will be running around trying to find out what this Mississippi town's 'big secret' is, while Clemens periodically escapes from his hospital room to go all bloodthirsty beast on various townsfolk.  And, yes, Clemens's attacks are accompanied by the familiar sound of cicadas.

This all makes for a fairly interesting plot, and for a little while at least we are happy to go wherever it is that The Beast Within wants to take us.  Unfortunately, The Beast Within is one of those movies where the journey is much more interesting than the final destination.  When we find out the truth behind all of this, it makes little sense.  Apparently, some local town baddie was captured and imprisoned in the cellar of a house for years, fed human body parts as his only nourishment until he went all beastie, escaped his bonds and raped Besch before expiring.  How did he go from being a human to being a monster?  What do cicadas have to do with this guy?  Is Clemens a reincarnation or just a victim of poor genes?  The movie ends without ever addressing any of these questions.  It all scores very high on the frustration meter.

Aside from these serious story holes, there are many good qualities within The Beast Within.  Cox and Besch deliver good, convincing performances, the deep south in Winter atmosphere is very effective and palpable, and for gore-hounds, there's plenty of good kills throughout as well as the infamous scene where Clemens transforms from boy to beast (although, the resulting creature effects for the film's final passages are kind of cheesy).  The performance by Paul Clemens, leaves much to be desired, though.  It's true he isn't given much more to do other than stand around looking bug-eyed and pale, but when he has dialogue, the delivery is pretty flat.

There are definitely worse movies of this stripe out there; it's just a little disappointing that the filmmakers of The Beast Within didn't demand a script rewrite or two in order to fully develop its themes.  The Beast Within could've been so much better, but as it is, it just barely rates as middling.