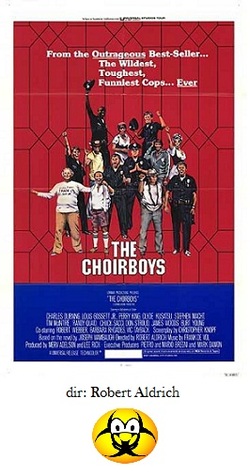 In 1977, something went disastrously wrong with this movie. Never has one movie been able to pack so much offensiveness into 2 hours as The Choirboys does. Let's see, we have rampant misogyny, homophobia, and racism, sprinkled with suicide, murder, extortion and even animal cruelty. Oh, did I forget to mention this is a comedy?  It may be hyperbole to say that The Choirboys is the worst comedy ever made, but at the very least, it makes the entire Police Academy franchise look like the work of Ingmar Bergman.

Based on the popular novel by Joseph Wambaugh which was essentially an angry, blackly comic satire about how L.A. cops deal with job stress. But something was really lost in the translation by director Robert Aldrich, and Wambaugh himself loudly and publicly panned the movie.

The Choirboys starts off very slowly, as we are introduced to our cop 'friends'. There is Charles Durning who is affectionately called "Sperm Whale", Louis Gossett Jr., who basically functions as the token black cop, bad movie favorite Perry King, Tim McIntire, Randy Quaid, James Woods and Don Stroud. There are others as well, but of lesser importance.

Anyway, the cops are having a party, which consists of lots of frat-boy type behavior; at one point a woman, who is dressed only in a robe, sits on a glass coffee table. Slob cop Stephen Macht crawls under the table so is face is pressed up against the glass right where her crotch is and begins to lick it. The guys tell her they're just having fun and to lighten up. Ha ha ha. The next day we have Quaid and McIntire being called to the roof of an office building where a black woman is threatening to jump, McIntire tries to coax her off the ledge by insulting her. She jumps. Ho ho ho. We also are given a scene to establish a relationship between King and a prostitute named Foxy.

The boys go to "choir-practice", which is their term for going to the local park and getting sloppy-drunk. McIntire is passed-out and the guys decide to take a live duck and zip its head up in his pants. The image of the duck desperately struggling to free itself is pretty appalling. One of the guys says "I never knew him to duck a f*ck, but to f*ck a duck?". McIntire awakens, jumps into the pond and strips off his pants, then he takes his gun and runs half-naked after them. His pals subdue him and handcuff him to a tree. Next, is the arriveal of this movie's portrait of a gay man who minces around walking his pink poodle and happens upon McIntire and utters "My God, a naked person, in the dark, My God, in the dark", McIntire of course threatens to "Rip your kidneys out and puncture your spleen." "You'd do that for me?" inquires the queen.

Next we have Woods and Lyles hiring Vic Tayback (Mel from television's "Alice"), to pose as a homosexual to arrest guys in public restrooms. How does this sting work you ask? By accident, he happens upon McIntire and begins to seduce him with a creaky version of the song "I've Got a Crush on You." Next Woods busts some hookers.  Quaid and McIntire are on a call to a fight breaking out between some blacks and Mexicans in a tenement. McIntire threatens the Mexican leader with "I'll book your ass, set your hair on fire and throw you in the fag tank." he then gives him some advice about how to control his wife by beating her then rips off half his moustache. Quaid and McIntire of course get beaten up while zany music plays.

Stroud goes to Foxy's apartment where he sees that she has a man tied to a beating post wearing a leather mask on, and it turns out to be Perry. He frees his friend and calls Foxy a "Scum sucking freak, do you groove on pain?". The next day the guys are told Perry is dead from suicide.  No tears are shed.  The guys are at the park again, they lock up Stroud in the police van because he is drunk, but since he was in Vietnam he has claustrophobia and freaks out.  A young man in the park hears his cries and opens the door and is shot in the neck. McIntire of course thinks this is funny and says "So, he shot a park faggot."  Anyway to wrap this baby up, Durning takes the blame for the incident and is fired, but Gossett Jr. is able to get his job back by blackmailing the police chief. So the guys get away with murder and boy are they happy!!! The credits roll, and we get slow dissolves of all of their sneering faces while they laugh on an endless loop on the soundtrack. The end.

Yes, as I described them, these incidents don't sound very funny, do they? Well they aren't, but the filmmakers thought they were and everything that happens is given a reaction shot of someone doubled-over with laughter.  Regardless of how hurtful or asinine those events might be; they all function on the exact same level.  I've left out a lot more, I'm sure, such as P.I. Burt Young calling himself the "P*ssy Posse", or the Japenese Cop who thinks he's Dracula and wears fangs wherever he goes. But why beat a dead horse.

Anyone who considers The Choirboys entertainment really needs an adjustment in their 'taste meter.'