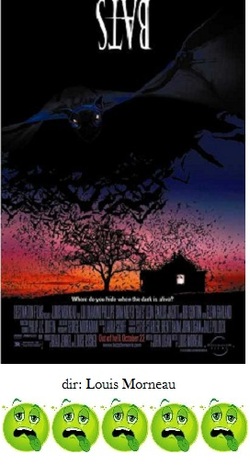 About the only positive thing that can be said about Louis Morneau's Bats is the fact that the theatrical posters and the DVD artwork featured the title written upside-down.  Get it?  Yeah, clever.  Prospective movie directors take note of the career trajectory of Mr. Morneau since this fiasco: The Hitcher 2: I've Been Waiting, anyone?  Although, I doubt even Martin Scorsese could've made the proverbial lemonade while saddled with such a lemon of a laughable script and Lou Diamond Phillips as the leading man.

Bats is about..well..bats.  But not just any bats, these have been genetically mutated and, naturally, they've found their way into the wild and are reproducing like crazy.  After several citizens of the sleepy desert community have been chewed to pieces, our sheriff Lou, along with a plucky zoologist (Dina Meyer) delve into the local caves to combat the bloodthirsty creatures.

This plot doesn't exactly set the world on fire, but many an entertaining film has had such humble beginnings, but this movie seemed like a perfect storm of ineptitude.  First, very little of the science involved, both about the genetic mutation or the supposed expertise from the Meyer character, ever reaches above a pre-school level, and what does hardly makes a lick of sense.  Second, Morneau doesn't know how to film horror; the slack pacing and odd camera angle selections drain any tension the action might've been created.  Third, the rubbery bat effects and obvious fake looking`CGI is more laughable than horrifying.  And, finally, we have the dependably bad Lou who, with the possible exception of Christopher Lambert, is one of the most consistently wooden actors of the last 25 years.  His expressions run the gamut from blank intensity to blank thoughtfulness.  We shouldn't complain too much, just think of how many actors in Hollywood passed on Bats before finally settling with him.

If you are looking for a scary creature feature, Bats is not what you're looking for.  But if you want to make some popcorn and fill your night with unintentional hilarity, it might just fit the bill.