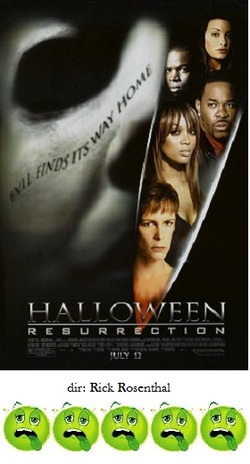 This 8th film in the Halloween franchise was the 3rd flop that threatened to put Michael Myers on ice for good.  After the dismal Halloween 5: The Revenge of Michael Myers and Halloween: The Curse of Michael Myers, the series was reinvented again with the more knowing Halloween H20, which dismissed the prior films and started fresh with a grown-up Laurie Strode (Jamie Lee Curtis).  Many liked the new approach (although I didn't particularly think it was all that).  Naturally, another film was churned out, and the results were so dire it would take Rob Zombie years later to give it another new spin (but he would kill the series again one film later).  This installment may not be the worst of the series, but it certainly is the most useless.

Halloween: Resurrection begins so disastrously, with the quick and unceremonious killing of Laurie Strode in a mental hospital, the film never recovers.  The bulk of the plot involves the production of a new reality television show where the cast members are locked in the Myers house, and all of the goings on are to be aired live.  If this idea for a story isn't already putrid in and of itself, the lame stunt casting of Tyra Banks and Busta Rhymes also causes the gorge to rise.  It's pretty obvious that no one involved had any real affection for the franchise, after all, this film could have been titled just about anything and could've played out almost completely intact; just call the setting for the show the, I dunno, 'Davis House' or 'Miller House' instead of the 'Myers House' and you'd still have a lousy film ,but one that doesn't sully the series.

There are no scares or excitement to be found anywhere.  It just a bunch of endless scenes of various cast members wandering around the darkened house with those annoying head cams in order to give it an 'authentic' reality show feel.  And once in awhile Michael Myers springs out like a jack-n-the-box and offs someone.  You'd think the Myers House were the size of the Biltmore the way Michael can remain undetected throughout.  Boring and pointless, Halloween: Resurrection was dead  just at the concept level.  It needed to be buried before the script was even written.