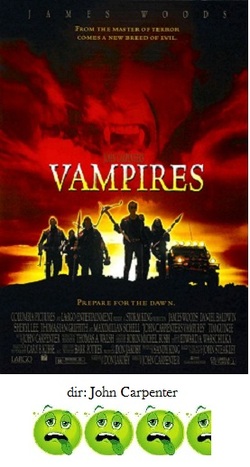 Director John Carpenter seems to mostly make two kinds of movies: very moody and effectively scary horror flicks (Halloween, The Fog, The Thing etc.), or brain-dead, testosterone-overdosed, action losers (Escape From L.A., They Live, Big Trouble in Little China etc.). Once in a great while he will do a horror one the flops (Village of the Damned) or an action one that works (Assault on Precinct 13) but the rule is rarely broken. Vampires falls squarely into the second category, and except for maybe Escape From L.A., it's really one of his worst.

The movie begins with a very over-the-top James Woods, as a modern-day vampire hunter wearing the tightest jeans EVER, and his band of rogues who are traveling the New Mexico desert in search of abandoned buildings which vampires are using for nests. Anyway, they storm the compounds, shoot the baddies with harpoons that are connected to a wench on a truck outside. Once the vampires are spiked, they are dragged into the daylight where they explode into colorful flames. It's odd that their harpoon guns are never shown to actually be connected to anything until after the vampire is shot, but never mind. With the first nest cleared, the guys go to the local motel for some boozing and whoring.

Enter the Head Vampire, the Big Cheese, the Top Bat. He's a bit pissed off and crashes the party, slaughtering everyone there except for Woods, his sidekick, Daniel Baldwin, and Sheryl Lee (Laura Palmer of Twin Peaks) as a hooker who is bitten by the Head Vampire.  The three embark on an endless trip where Lee hallucinates, seeing everything from point-of-view of the Head Vampire. Woods detours to the local monastery to recruit a young priest to help him. This hilarious scene has Woods beating the bejesus out of the priest and then taunting him with "You liked it when I was beaten ya up, didn't ya. Did you get wood?"

Anyway, the whole plot revolves around the Black Cross, which the head vampire wants to use to be able to live during the daylight. He finds it. Woods and friends find him, final battle ensues. Our hero saves the day. The movie ends with Baldwin getting bit also, but since he loves the already bitten Lee, they decide to take a camper and leave together. Woods and the priest stay to clean up the mess while making erection jokes.  Doesn't sound like much happens here does it? Well, it doesn't. Between the boredom and bad jokes, there is the occasional priest that gets butchered. Woods performance is so bad it's a wonder he didn't get a Razzie nomination, and Lee must have been desperate for work since all she gets to do is to get beaten up, tied down, or scream.

All in all it must have taken all of 4 days to shoot this entire movie. It's boring, bad and just ineptly done.  After this film and John Carpenter's Ghosts of Mars both flopped, Carpenter has kept a very low profile.  Hopefully, he'll get back to form soon.