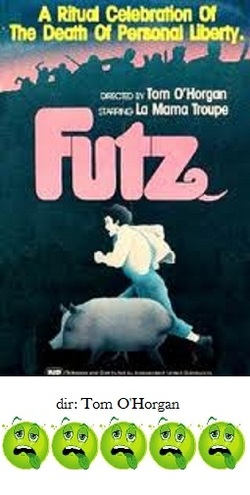 As I was watching the nearly unwatchable Futz, all I could think was that the drugs the cast and crew were taking must have been awfully good (or awfully bad depending on your point of view).  There’s just no other explanation.  I defy anyone who isn’t going through a bad LSD trip to explain, coherently, what all of this was about.

Futz is based on a hippie-era play and the biggest problem with it is the fact that the film makers couldn’t decide whether to keep it as a filmed play or to “open it up” as a real movie.  So they did both, often at the same time.  Therefore there are whole scenes that bleed back and forth into each other from stage, where the cast of youths scurry around, yell and “act” for an audience of yokels, to something more movie-like, but even then those moments veer from naturalism to artificiality.  Considering the story is completely garbled, these visual gymnastics only muddle things further.

So, what is this all about?  The best I can gather, there’s this guy named Futz who is desperately in love with his favorite pig, named Amanda, then there is this other mentally-challenged dude who witnesses Futz and the pig in a compromising position which caused him to go insane and kill a local girl.  Believe me when I say that just gleaning this little bit of plot was a major chore…and that’s all I’ve got.  There are many other characters, sure, and they do speak English, but almost every line uttered is bafflingly obtuse.  Anyway, the killer is hanged and the townspeople rise up against Futz’s unnatural pig-love, and while trying to sodomize Futz with a corncob, they slice Amanda’s throat and coat Futz with the blood, and then it just kind of fizzles out and ends.

As far as the acting goes, who knows if it’s good or not?  The credits list the cast as the ‘La Mama Repertory Troupe’ which is full of a lot of unknown faces except for the odd presence of two future-Oscar nominees: Frederic Forrest and Sally Kirkland.  Forrest is pretty invisible through most of the movie and Kirkland is only notable because of the frequent shots of her bare naked straddled atop a pig.  All of the actors are at least committed to performing this nonsense to the expected energy level, I suppose, but all of it amounts to a little narration, a little chanting, a little singing, a little screaming and whole lot of running around.

When Hair premiered on Broadway in the 1960s, it was a sign of a new era in theatre, but with every great success there is always the inevitable backwash of copycats who think they can also capture lightning in a bottle, but only provide one more bit of unwatchable would-be entertainment.  This describes Futz to a tee.  Futz is a dated relic that ought to remain buried.