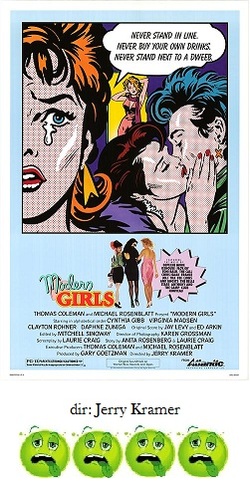 The very worst thing about Modern Girls is the way it takes three of the most likable and sunny actresses of the day and turns them into vapid, annoying twits.

Modern Girls is about nothing.  It has nothing to say and it has no plot to speak of.  It's just 90 minutes of following a group of idiots around the city for a night of drinking, partying and romance.  There was plenty of drinking and partying.  What romance there might have been is debatable.

The modern girls in question are played by Virginia Madsen, Daphne Zuniga and Cynthia Gibb, and their natural appeal carries the viewer pretty far into tolerating the movie.  But not entirely.  Anyway, It's Friday night in L.A., and it's time to go clubbing and looking for cute guys.  Madsen is just getting over a bad breakup and takes off ahead of the other two, leaving her blind date, Clayton Rohner, in the lurch.  Luckily for them Rohner has a car, so he turns into their default chauffeur for the evening.

So, what happens in Modern Girls?  Let's see.  Gibb has a meet cute with a minor celebrity (also played by Rohner, but with black hair and pale, pancake makeup), but the club is raided and they lose each other in the melee.  We spend the rest of the movie following Gibb as she and her pals go from club to club trying to find this guy.  Not too underwhelming.

We get to see the gals in a goth club.   We get to watch how smoothly Rohner (who is constantly being mistaken for the celebrity, even though none of these pinheads can seem to figure out why) gets them all into the exclusive Voodoo club, so named because of the tropical pirate theme throughout it.  We see them infiltrate a music video shoot.  And in the movie's most borderline sleazy scene, while in a redneck bar Madsen takes some Exstacy and slinks drunkenly around on top of a pool table while a crowd of truckers slowly begin to circle her, apparently getting ready to re-enact the rape scene from The Accused.  Yes, Modern Girls will stoop to potential gang rape to get a laugh.

After wading through all this nonsense, we finally arrive to the following morning where Gibb has finally tracked down Not-Rohner at a small airport.  He proclaims that she is his one true love and wants to take her with him....and she doesn't.  No, she lets him go, wanting and needing to stay with her pals.  The end.  Yes, we went through all of this to get to an ending where the lovers can finally get together, but don't.  Basically, all of this was for nothing.

But I guess we shouldn't be surprised by this non turn of events.  Modern Girls began with a group of blank slates and it ends with a group of blank slates.  The acting by the cast is okay, I suppose, but they just don't have any characters to portray, or should I say, we'd rather see a movie with more interesting characters than these.  The whole thing is just one big empty experience.  The soundtrack, however, is pretty terrific.  So there's that.