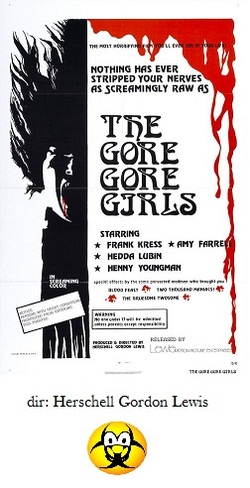 Like it or not, Herschell Gordon Lewis cemented his spot in film history with the release of Blood Feast in 1963.  As awful a movie as it was, it was the first to bring extreme violence and gore into American cinema, ushering in a new genre called 'Splatter Films'.  1972's The Gore Gore Girls is just more of the same, an exercise in lame writing, cardboard acting, and gore so revolting it'll turn the stomachs of even the most hardened gore hounds.

The plot (and I use the term loosely) is about a young female reporter (Amy Farrell) who joins forces with a snotty, pretentious private investigator (Frank Kress) to solve the mystery of who is murdering the strippers at the local sleazy club run by, get this, Henny Youngman.  The script falls into a repetitive mode of watching a stripper on stage do her act, and then watching her die a grisly death afterwards, with only the occasional respite of scenes with Farrell and Kress bumbling through an investigation.

How gory is The Gore Gore Girls, you ask?  Let's see.  One stripper has her face smashed into a mirror and then her head is hacked open and her eyes are pulled out and squished; one is held down on the kitchen table while her bare buttocks are beaten to a pulp with a meat tenderizer before she also has her head and eyes destroyed; one takes a hot iron to the face where her skin melts, then the killer snips off her nipples with scissors (and yes, milk squirts out of one breast and chocolate milk squirts out the other, with which the killer fills up a couple of cocktail glasses); one has her face shoved down into a boiling pot of cooking oil, and so on and so on.  Sorry to go into so much detail here, but there is little else that happens in the movie except for scenes like these.

The acting by all involved is horrendous and the production values are so threadbare they remind one of that cheapo monster movie the kid down the street filmed in his basement.  There is absolutely nothing of value to be found in The Gore Gore Girls's endlessly long 80 minutes of screentime.

I know some may say that Lewis's films aren't meant to be taken seriously and it's all just for fun.  If movie's like this are their idea of fun, more power to them; for me, they just go so far beyond nauseating that it's more depressing than anything else.  The Gore Gore Girls also inspired much pity for the parade of humiliation the actresses on screen are put through.

(This review will suffice for any other Herschell Gordon Lewis film, as well.  Whether it's The Gore Gore Girls, Blood Feast, Color Be Blood Red, Two Thousand Maniacs, The Wizard of Gore or any of the others.  They all inspire equal contempt.)