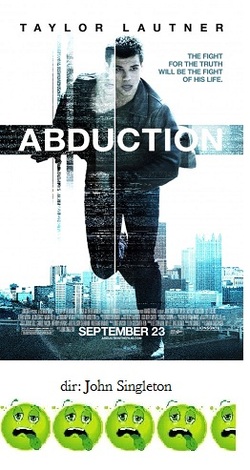 Oh, Taylor.  So pretty.  So untalented.  Not since the brief heyday of Paul Walker has such a plastic, lifeless bohunk been force-fed to movie audiences in the guise of being a legitimate "actor."

It's easy to see why Taylor Lautner agreed to star in Abduction, after all, the Twilight franchise is just about over, which will most likely mean his 15 minutes will be ending itself fairly soon anyway.  The big mystery is why mega-talented director John Singleton (Boyz N the Hood, Higher Learning, Rosewood), and terrific performers like Alfred Molina, Maria Bello, Sigourney Weaver and Jason Isaacs all had temporary lapses in sanity and judgment to take the plunge with him.  I guess some bills were due.

Lautner stars as a generic high-schooler with a rather un-generic homelife.  In between study sessions with the chippie across the street (Lily Collins), Lautner can be found in the backyard getting "training" lessons by dad Isaacs, which looks more like a father working out his frustrations at not succeeding as a UFC champion onto his son's face.  Anyway, while surfing the internet, Lautner stumbles onto a website about missing children and finds a toddler version of himself.  Gasp!  Are Isaacs and Bello not his real parents?  One look at both Isaacs and Bello would be enough to tell you that no combination of their genes could possibly come up with someone who looks like Lautner (don't get me wrong, Isaacs and Bello are good-looking themselves, but Lautner looks nothing like them), so why this is such a surprise to anyone is anybody's guess.  No sooner has this revelation been uncovered then a group of generic Russian thugs show up, kill the parental units (who turn out to be federal agents) and blow up the house while Lautner and Collins escape.

For the vast bulk of Abduction, we are subjected to thoroughly unexciting car chases, flatly choreographed shootouts, many opportunities for Lautner to engage in some fisticuffs and lots and lots and lots of cellphone calls.  Regardless of what seems to be happening on screen, Lautner maintains the same freshly blow-dried, dead-eyed expression.  Why these baddies are after Lautner has something to do with a list of secret agents or something, but this seemingly vital reason for the movie is treated as just a throwaway detail.  It never matters where the list is, who has it or how it got there.  It just is and that's all.  Molina is on hand as a CIA agent trying in charge of this situation, but whose own motivations are equally murky, and Weaver is also a secret-agent who happened to be pretending to be Lautner's psychiatrist.

Trust me, all of this makes Abduction sound a lot more exciting than it is.  In fact, you needn't even bother watching Abduction to be able to pretty much figure out exactly what will happen to who and why.  It's the very definition of cookie-cutter.  It simply flashes on the screen for 106 minutes and then completely vaporizes from the memory banks as the end credits roll.

As for Taylor Lautner, he was saved a Worst Actor 'win' at the 32nd Annual Golden Raspberry Awards by Adam Sandler's latest masterworks, Jack and Jill and Just Go With It.  For the 33rd Razzies, he's a got a great shot at the win with the newest Twilight entry.  Eventually, his prepubescent female fans will grow up and move on, so he better enjoy it while he can.