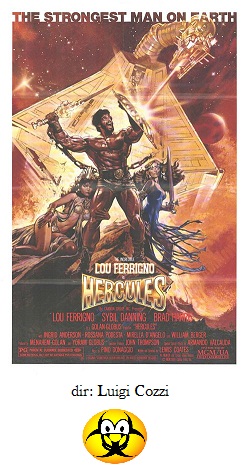 After Arnold Schwarzenegger finally made a breakthrough in movies with Conan the Barbarian, the time seemed right for his bodybuilding contemporary, and television's "The Incredible Hulk", Lou Ferrigno, to make his big bid for movie stardom.  Unfortunately for him, Hercules was the wrong choice.

Hercules is a cheesy, low-budget trashing of the Greek myth that is so impossible to understand that I pity the poor high school student who watches this in lieu of reading it for a class paper.  An "F" is sure to follow.

The first minute of Hercules should give you an idea of what little respect writer/director Luigi Cozzi has for the source material.  We are given a very somber bit of voice-over narration that tries to explain the creation of the universe.  The gods created the four elements; however, you'd lose a bet by assuming that means earth, air, fire and water.  No, the four elements are night, day, earth and air.  And the planets came into being from the opening of 'Pandora's Jar'.

Anyway, the gods (all three of them) make a bet that Zeus cannot create a man with the strength of a god.  Thus, Hercules is created, and in no time, he grows up to be Lou Ferrigno.  And now a word about Lou.  Physically, he had the right kind of screen presence to probably make a go of it in movies; however, his acting skills are, shall we say, lacking.  True, Schwarzenegger wasn't exactly a great actor at first, either, so it probably just came down to picking the right projects.

About the only scene in Hercules that will be familiar to anyone is the labor about cleaning out the horse stalls.  That's about it.  Trash queen Sybil Danning is on hand as the evil Ariadne, and we also get the sorceress Circe and the beautiful Cassiopea.  But we also get Hercules doing battle with a giant, robotic dragonfly, and a mechanical dragon that can "fire a beam of solar energy."  The movie just skips from one disconnected scene after another all punctuated with horrid special effects (check out the chariot flying through space dodging foam rubber asteroids while carrying little doll replicas of Hercules and Circe) and tons of expository dialogue that fails to clear anything up.

After Hercules was justifiably laughed off of movie screens, Ferrigno was consigned to even lower-budget junk than this.  He did continue to get work, so at least that's something.  As for Cozzi, he went back to Italy for most of his career, only directing projects in America every once in awhile using the pseudonym Lewis Coates.  But dude, you're not foolin' anybody.