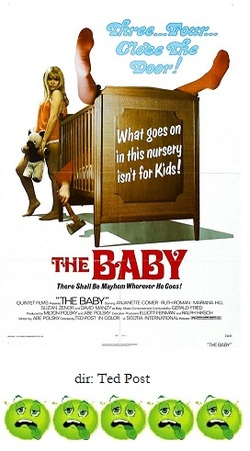 This one is a doozy. Only the most strong-willed bad movie conniseur should even attempt to view The Baby in its entirety. Yep, it's that bad. I ached to hit fast-forward on several occassions but I did not. I did it for you. You can email me your cash donations for my recovery.

What is The Baby? It's the kind of movie you almost HAVE to see, otherwise you'd never believe it actually got made. It is inept, 70s exploitation of the most ludicrous stripe.

The film is basically the story of Ann Gentry (played by Anjanette Comer), a soft-hearted social worker who is hired to provide service for the Wadsworth family. The Wadsworths are comprised of evil matriarch Mrs. Wadsworth (Ruth Roman, channeling the ghost of Joan Crawford), her two demented daughters Germaine and Alba and her son, Baby. Now Baby isn't really a baby, see; he's a twenty-something year-old man, but he only cries and gurgles, doesn't walk, sleeps in a crib and still wears diapers. Why? The movie never tells.

Anyway, Ann enjoys working with Baby and even tries to teach him to stand, claiming he has the potential to become normal. All of this is much to Mrs. Wadsworth's chagrin, Baby is perfectly happy the way he is, after all. And the movie basically becomes a battle of wills between Ann and Mrs. Wadsworth.

But there is some background to both stories. It is inferred, though not explicitly shown, that Baby is kept confined as a sex-object (we get one scene of Germaine stealing into Baby's crib after shedding her nightgown). He is also tortured with a cattle-prod by Alba, "Baby doesn't talk!" ZAP "Baby doesn't walk!" ZAP "EVER!" ZAP. After an evening out, the gals come home to find Baby suckling on the breast of the baby-sitter. They, of course, beat the bejesus out of the girl with a belt. As far as Ann's background goes, she is married, although the fate of her never-present husband is her "big secret". She spends her evenings at home with her mother-in-law sobbing over vacation slides.

Well, the battle over Baby becomes heated. Mrs. Wadsworth fires Ann, and in retaliation, Ann threatens to call the authorities to have Baby taken away. After a truce, Mrs. Wadsworth and the girls kidnap Ann and hide her in the basement during Baby's birthday party. Ann escapes and steals Baby away to her mansion. Ann and her mother-in-law have a plan, see, and they await the Wadsworth clan to arrive and take Baby back.

The finale has the Wadsworths breaking into the mansion in the middle of the night. Germaine's throat is slit and Alba is stabbed in the back, and then Ann and her knife-wielding mother-in-law push Mrs. Wadsworth over the staircase bannister. She breaks her legs, but doesn't die. The women bury the girls and a still living Mrs. Wadsworth in the back-yard, their plan to keep Baby a huge success. Why did they want to keep Baby, you ask?  You wouldn't believe me if I told you.  Let's just say that I about stopped breathing from laughing so hard.

The Baby is a deranged piece of work all right. And it does sound like some sort of demented masterwork, but don't be fooled. The first 15 minutes or so are actually quite bizarre and entertaining, in a perverse "what in the hell is this?" kind of way. But after that initial awe, it becomes an interminably boring affair. There is basically 30-45 minutes of story stretched out to 90 minutes. There is lots and lots of padding. In fact, the birthday party scene itself seems to go on for most of the movie's running time, and it's a gaudy affair with bad hair, go-go dancing, psychedelic lighting and costuming, and really wretched music. The acting is also beyond awful. Aside from Ann's ridiculously wide-eyed naivete and Mrs. Wadsworth's snarling and scenery-chewing, the worst offender is the actress playing Germaine. In every scene Germaine's hair gets bigger and bigger and her nails longer and longer and her face never changes from this deadened blank glazed-over look.

You haven't seen anything quite like The Baby and probably never will again. And believe me, that's a good thing.