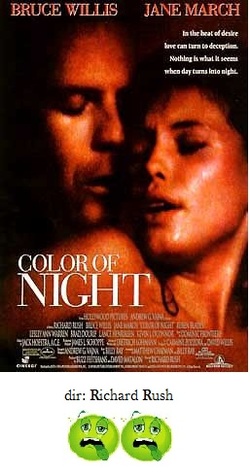 If you're looking for an example of a movie that's so bad it's good, look no further than the deliriously nutty, psycho-sexual thriller Color of Night.

Bruce Willis stars as a very successful psychiatrist whose life is thrown a huge curveball when one of his patients takes a swan dive out the window of his high-rise office.  She splats on the pavement and when Willis looks down at the body, he suddenly is struck with a color-blindness that leaves him unable to see the color red.  Despite the title, you'd be mistaken into thinking this has anything to do with the rest of the movie.

Willis decides to visit Scott Bakula, a colleague on the west coast.  No sooner has Bakula confessed to Willis that he thinks one of his patients is dangerous than he's butchered at his workplace.  Willis now decides to take over Bakula's therapy group and try to find out which one's a killer.  The crazies include Lance Hendrickson, Lesley Ann Warren, Kevin O'Connor and Brad Dourif.  There's also a young teenage boy with a speech impediment, but the less said about him the better.

Also complicating matters is the out of nowhere arrival of the waifish Jane March.  Willis and March get hot and bothered for each other in no time while patients in the group begin dying off.  What in the hell is going on?  Your guess is as good as mine.  You see, it seems that March really gets around and has developed some sort of strange erotic relationship with all members of the therapy group.  And the big 'twist' at the movie's end is so blindingly obvious to even the most unobservant viewer that you almost have to laugh at Willis's shock and awe.

Color of Night is just so much lurid, and at times, entertaining trash that one can't help feeling some affection for it.  Willis does his underacting routine here in juxtoposition to the rest of the cast's wild overacting.  In fact, when Warren, Hendrickson, Dourif and O'Connor are all in the same room together it's a wonder that everyone else doesn't pass out due to a lack of oxygen.  Sadly for Jane March, Color of Night was her bid for stardom in American movies (she was the star of 1992's French hit The Lover) and its critical thrashing sent her back into obscurity.  Once all is revealed in the movie's plot, you'll find March actually does a good enough job with what was essentially an impossible acting task that would've bested even the most seasoned of actresses.

There are actually two versions of Color of Night.  The shorter theatrical version is quite a mess and deserved to be savaged.  The director's cut is much longer but it at least fleshes out all of the inexplicable loose ends from the shorter version and provides much more character development and backstory to many of the characters.  Also, this longer version reinstates the infamous nude sex scene in a swimming pool where 'little Bruce' makes an appearance and for which Color of Night was threatened with an NC-17 rating.  The studio should've just released it as is; after all, it couldn't have performed any worse.